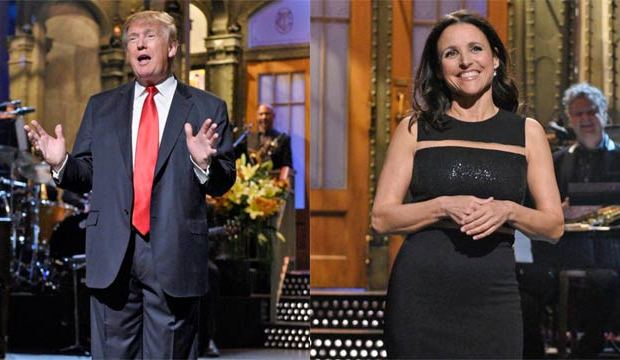 Now that Emmy voting has begun, it’s shocking to see which eligible contenders were left off of the ballots. In the past, the omissions of Katherine Heigl and Craig Ferguson made headlines and now our forum posters believe they’ve unearthed more newsworthy absentees. Visit our forums to view the link to the 2016 Emmy ballot.

Donald Trump for Best Comedy Guest Actor
The Donald may be close to winning the Republican nomination for President, but he won’t win an Emmy anytime soon. Despite a much publicized turn hosting “Saturday Night Live” earlier this season, Trump’s name was not submitted for consideration. Instead, six other male  “SNL” hosts were entered: Fred Armisen, Larry David, Drake, Ryan Gosling, Chris Hemsworth and Tracy Morgan.

Julia Louis-Dreyfus for Best Comedy Guest Actress
While “Veep” star Louis-Dreyfus appears prominently on the Emmy ballot for Best Comedy Actress, “SNL” did not submit her in the guest category for her hailed episode where she brought back her iconic “Seinfeld” character Elaine Benes. Get out! Instead, the five “SNL” female entries were: Ariana Grande, Brie Larson, Melissa McCarthy and Amy Schumer, with Tina Fey/Amy Poehler entered as a single submission.

“Game of Thrones” guest stars
Record-breaking Emmy champ “Game of Thrones” is looking to build on its nominations haul this year, but it won’t come in the guest-acting categories. Only one guest star — Max von Sydow — is submitted on the ballot. Three-time nominee Diana Rigg was in too many episodes this year to qualify for the guest category (she’s also absent from the supporting race), while former “Deadwood” Emmy nominee Ian McShane is absent despite his memorable appearance in last week’s “The Broken Man” episode.

Join the Emmy Awards ballot discussion in our message boards

“The Daily Show with Jon Stewart” for Best Variety Talk Series
When Jon Stewart told us in the Emmy press room last year that he would not be submitting the final three month of his show for Emmy consideration, he wasn’t kidding. Instead, the new version of “The Daily Show” hosted by Trevor Noah is the only version of the program on the ballot.

Angela Lansbury and James Earl Jones for Best Movie/Mini Leads
Airing as part of the “Great Performances” series on PBS, “Driving Miss Daisy” was thought to be a shoo-in for performers Lansbury and Jones, but they were strangely left off the ballot. Lansbury and Jones are both Emmy favorites, with Lansbury being an 18-time nominee (never winning, though) and Jones a two-time winner for “Gabriel’s Fire” (1991) and “Heat Wave” (1991).

Emmy contenders may be entered into competition by many different sources: production companies, TV networks, agents, managers, publicists or the contenders themselves. Just because PBS did not submit Lansbury or NBC did not submit Trump, does not mean those contenders were shut out of their races. They could’ve entered themselves if they were willing to pay the submission fees, which can cost more than $200, or if they used up one of the free entries they get if they are dues-paying members of the Television Academy. Whenever someone or a TV program is left off of the Emmy ballot, it can be difficult to figure who is responsible.

Will Best Comedy Guest Actor be a full 'Saturday Night Live' takeover at the Emmys?