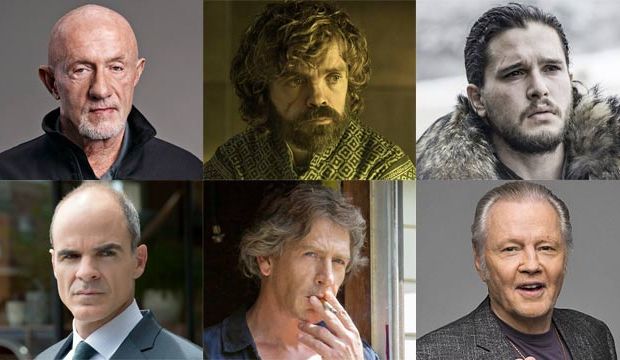 With his bid last year, Banks became the first person ever nominated in this category for three different shows (he contended for “Wiseguy” in 1989 and “Breaking Bad” in 2013). On this “Breaking Bad” spin-off “Better Call Saul,” he plays Mike Ehrmantraut, a former police officer who later becomes a private investigator and “cleaner.” According to the official AMC listing for his episode “Bali Ha’i”: “Jimmy finds comfort in a familiar place. Kim receives a life-changing proposal. Mike is pushed to the limit when what he holds dearest is threatened.”

Dinklage has won at the Emmys twice in 2011 and 2015 among his six career nominations for “Game of Thrones.” Another victory would tie him with Aaron Paul (“Breaking Bad”) for the most in this category. He plays Tyrion Lannister, a member of the wealthy and powerful family who has been fighting his whole life against ridicule of being a dwarf. According to the official HBO listing for his portion of the episode “No One”: “Tyrion and Varys walk through a reinvigorated Meereen, noting the Red Priestess preaching support for Daenerys. With the city under attack, Tyrion admits he was wrong about the Masters but Grey Worm takes charge of the city’s defenses.”

Harington is a rookie nominee this year for “Game of Thrones” playing Jon Snow, a young man loyal to the Watch and its demands who was brought back from the dead this season. According to the official HBO listing for his portion of the episode “Battle of the Bastards”: “In a field outside of Winterfell, Jon Snow and his supporters meet with Ramsay Bolton and his contingent. Ramsay tells Jon to kneel and all will be pardoned. Agreeing there is no need for thousands to die, Jon offers to fight one-on-one instead.”

Kelly now has his second consecutive nomination for playing Doug Stamper, the loyal-to-a-fault chief of staff to the U.S. President on “House of Cards.” According to the Netflix listing for his episode “Chapter 44”: “After the presidential assassination attempt, Claire advises the VP Donald Blythe on dealing with Russia. Further investigation of Lucas Goodwin by Doug dredges up his accusations against Frank.” Click here to watch our recent chat with Kelly.

Mendelsohn returned to “Bloodline” as the ghost of Danny Rayburn, the oldest son and black sheep of a Florida family who was killed off in the first season. According to the Netflix listing for his episode “Chapter 23”: “Marco scrambles to get Eric immunity. Nolan recalls meeting Robert. Meg and Kevin turn against John, who pursues the one man who can alter his fate.”

Oscar winner Voight (“Coming Home,” 1978) is a four-time Emmy nominee who has his second nomination in this category for “Ray Donovan.” He plays Mickey Donovan, a former prisoner, Irish gangster, and father of the title character. According to the Showtime listing for his episode “The Kalamazoo”: “Adrift from his family and estranged from Ezra, Ray is enlisted by a wealthy family to free their kidnapped son and finds himself enmeshed with an entirely new class of people. Meanwhile, a retired Mickey stumbles upon a new enterprise.”