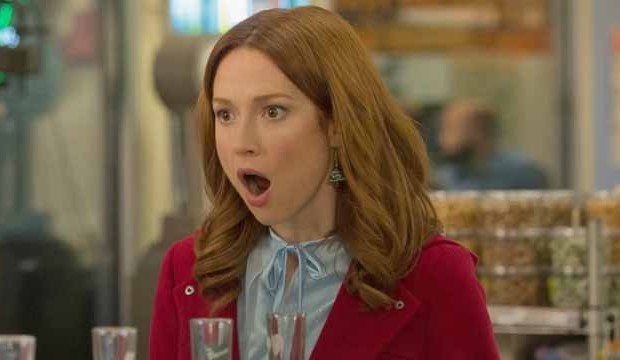 SYNOPSIS
In the spirit of Fake Christmas, Kimmy and Dong (Ki Hong Lee) go on a trip to the Poconos, shacking up in an abandoned hotel. After a night of fun-filled adventures, Kimmy is ready to sleep with Dong for the first time, or so she thinks: every time he tries to kiss her, she whacks him in the head with a hotel telephone. Kimmy just can’t get intimate with Dong, and feels there must be something wrong with her. While shopping for an ice pack, they run into a convenience store clerk who looks an awful lot like Joshua Jackson (because it is Joshua Jackson), who makes Kimmy realize that sex and romance are indeed complicated. She decides to try again, but not before purchasing a box of condoms.

Back at the motel, Dong has an allergic reaction to the latex. Kimmy’s forced to call an ambulance, blowing Dong’s green card marriage to Sonja (Suzan Perry). Facing deportation, she suggests they hook up while he’s handcuffed in the back of a squad car. It works, perhaps because she’s only comfortable being with a man who’s restrained. She returns home to celebrate the rest of Fake Christmas with Titus (Tituss Burgess) and Lillian (Carol Kane), devastated that she can’t leave her past behind.

Can Kemper win her first Emmy? Let’s take a closer look at her submission:

PROS
What Kemper does in this role isn’t easy: she has to play sunny and naive without coming across as a total dunce. It’s the kind of delicate balancing act that brought Bette White an Emmy for “The Golden Girls” (1986), so why shouldn’t it work for Kemper?

This season provided Kimmy with opportunities for real growth, as she comes to terms with the fact that she may need help adjusting to the outside world. This episode in particular is the catalyst for that, as she discovers that her past has given her intimacy issues.

After handing this prize to Louis-Dreyfus four years in a row, perhaps voters are eager for a new face. They certainly couldn’t go wrong with Kemper, or, for that matter, three-time supporting champ Laurie Metcalf (“Getting On”), Tracee Ellis Ross (“Black-ish”), Amy Schumer (“Inside Amy Schumer”), or six-time career winner Lily Tomlin (“Grace and Frankie”).

CONS
Louis-Dreyfus has won this award four years in a row. And with “Veep” still the front-runner for Comedy Series, there’s no reason to think she’ll stop winning anytime soon.

“Kimmy Schmidt” has had a tough go with Emmy voters so far. Last year, it scored seven nominations but Kemper was snubbed. This year, Kemper is in, but the show is down to just four bids. It has also yet to factor into the Writing and Directing races, a surprise given its pedigree. Could this hurt her chances?