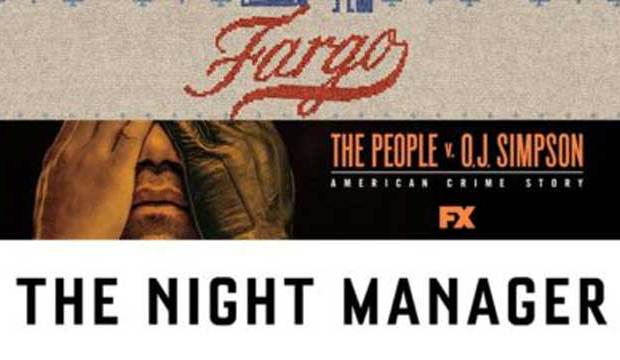 Seven talented scribes have been nominated for their six scripts that are contending for Best Movie/Mini Writing at this year’s Emmy Awards. This highly prestigious category is dominated by newbies. The only Emmy vet is “Fargo” creator Noah Hawley who has one previous writing nomination plus a directing bid this year. In such a wide-open field, anything can happen.  Let’s check ‘em out.

Full disclosure:  I am an Emmy voter in the Writers Branch and will be voting in this category for the final award. I will watch all the nominees back-to-back and mark my ballot.  Until then, I shall refrain from making any comments on the horserace and instead want to focus on the scripts themselves and the Emmy history of their lucky writers. That being said, here are this year’s nominees:

The second-season finale of the FX limited series had a lot of plot points to tie up, but Hawley’s script never made it feel mechanical. Part of the reason is that, while some characters’ fates are definitively resolved, others are left open to speculation about their ultimate future. And it’s a dialogue-heavy episode (not always the case with “Fargo”), including two standout scenes – Ed & Peggy’s final conversation in the meat locker, and the discussion between Lou and Peggy as she is being driven back to Minnesota and is forced to accept her fate. Yes, it’s talky, but it’s the quality of the talk that has led to Hawley’s 3rd nomination.

“Loplop,” Episode 8 of “Fargo’s” season 2 and written by this Emmy first-timer, takes a bit of a pause in the series’ forward momentum, and that’s not necessarily a bad thing. DeLaurentis’ script is an entertaining risk, focusing on the same time frame as Episode 7 but taking the four main characters who had the least to do with that episode’s action — Ed, Peggy, Dodd and Hanzee — and following what they were doing while the events of Episode 7 were going on elsewhere. He shifts “Fargo’s” dramatic nature and turns it into dark comedy. (Did Hanzee really ask Peggy to give him a haircut?) That contrast in tone alone has helped to make the script to “Loplop” a standout and an Emmy nominee.

“The Night Manager” – “Episode 1”
Written by David Farr (1st Emmy nomination)
This Emmy newbie submitted he first episode of AMC’s six-part-mini-series based on the novel by John Le Carré. It includes everything you’d expect from a Le Carré novel — characters who aren’t who they appear to be, a complicated but not overly complex storyline, and a view of the world that’s deeply, darkly cynical. Farr wisely moves up the action from the novels setting in the Cold War to Cairo during the Arab Spring, giving the story a contemporary kick. Jonathan Pine might only seem like the night manager of the Nefertiti Hotel as Episode 1 begins, but he is soon asked by a hotel guest to get the goods on her evil boyfriend. Pine’s actions soon come to the attention of spymaster Angela Burr who notes a connection between the boyfriend and notorious criminal Richard Roper whom she’s been trying to catch for years. She decides to enlist the help of the poor night manager to land her big fish. If it sounds confusing, Burr’s clear writing style makes it easy and prompts the audience to want more.

The O.J. Simpson trial certainly had its share of publicity hogs — Johnnie Cochran, F. Lee Bailey and, of course, the defendant himself.  The one person who never sought the spotlight but who was almost destroyed by the tabloids, however, was prosecutor Marcia Clark, and the way the defense team used subtle (and not-so subtle) sexism to try to bring her down is the focus of this first-time nominee’s script. Though all Clark wanted to be was a good lawyer and a good mother, DeVincentis’ script shows how she was made to become a national punchline —from her wardrobe to her hairstyle — engendering snickers from court observers to the American public in general. The episode dramatically illustrates that the U.S. judicial system was not immune from the double standard of sexism.

This marks the first Emmy nominations for these Golden Globe-winning pair (“The People vs. Larry Flynt,” 1996). Their script for the premiere serves as an important scene-setter and is as much about illustrating the racial tension that had already festered in 1994 Los Angeles as it is about Simpson. Alexander & Karaszewski are wise enough to realize that the audience already knows the outcome of the trial — their approach is not just to tell what happened but to suggest the reasons (from the Rodney King beating to the L.A. riots) why that notorious verdict happened. Yes, there are quite a few characters that they must introduce, but their achievement here is to set audience expectations as to what they can expect in the nine episodes to follow.

It’s been bubbling around the edges of the series all season, but the topic of race finally comes to a boil in Episode 5 of the mini-series, written by this Emmy freshman who has already been signed to write Marvel’s “Black Panther” for 2018. Cole wastes no time in tackling the volatile subject, with Cochran being handcuffed in front of his daughters simply for being a black man driving a nice car in a white neighborhood.  The essence of the episode, however, is the conflict between Cochran and prosecutor Christopher Darden over the use of race in the trial and the “n” word in particular, a word that Cochran has forbidden his daughters to say but one which he strategically uses when he needs it in order to win. At the same time, Darden begins to wonder whether he is being used as a front for the prosecution simply because he’s black.  In the way the series incorporated gender issues in “Marcia, Marcia, Marcia,” here Cole does the same with racial tensions without ever getting in the way of telling a good story.