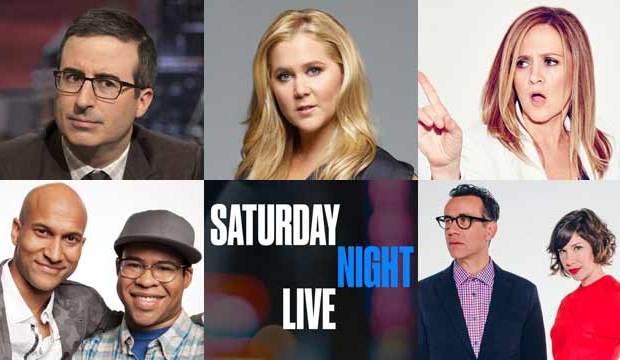 Over the past few weeks, I’ve reviewed the nominees in all of the major writing categories, and now and then I find a category where a few of the nominees have previously won an Emmy.  Welcome to the Emmy behemoth that is Best Variety Series Writing.

Number of Emmy wins among them: 52

Number of Emmy nominations among the writing teams: 476

Granted, much of this real estate belongs to writing nominee Lorne Michaels (“SNL”) — 14 wins from 76 nominations — but this is a category with some seriously heavy Emmy hitters, even among new shows. Let’s check ‘em out.

Full Disclosure: I am an Emmy voter in the Writers Branch and voted in this category for the final award. Rather than making any comments on the horserace, I would like instead to focus on the scripts themselves and the Emmy history of their lucky writers. That being said, here are this year’s nominees:

To my mind, “Full Frontal” is one of the most interesting stories of this Emmy season. Many pundits, myself included, thought that “Full Frontal” would be nominated for Best Variety Talk Series and were a little bit shocked when the series came up short in that category. So it is particularly telling that, when it comes to writing, where are most of those nominees (Corden/Kimmel/Fallon/Maher)?  Nowhere. “Last Week Tonight” and “Full Frontal” are the only variety talk series in this race and appear to be the sole legitimate heirs to the Jon Stewart throne. And in the world of Emmy, that’s an imprimatur.

Last summer was a big one for Amy Schumer with her feature film “Trainwreck” in theaters and her show’s parody of “12 Angry Men” fresh in voters’ mind. And as a result, the series won this Emmy.  This year the buzz was muted, though the “Welcome to the Gun Show” episode was a powerful takedown of the NRA as it dealt in part with the 2015 shooting at a theater playing “Trainwreck.”  The series is still the prohibitive favorite going in, but I would have to rate this category as a toss-up.

Keegan-Michael Key and Jordan Peele have had a big media presence this year with the duo starring in the film “Keanu” and a series of Booking.com wedding ads. Key also being featured in what seems like every other movie this year. Like Schumer, the duo hasn’t had a breakout sketch this year in the way  that”Negrotown” hit last season. But given their heightened media awareness and the fact that this is the final season for the series may be enough to carry the series to its first Emmy award in this category.

Being on the same night as “Game of Thrones” has heightened viewership for Oliver’s series which, like Bee, is considered more of a successor to Jon Stewart than the snubbed edition of the “Daily Show” hosted by Trevor Noah. That Oliver’s Sunday night commentaries tends to wind up being cited on Monday morning’s cable news shows is telling as far as buzz, and that may be enough to bring the series its first win here.

This critically acclaimed series starring Fred Armisten and Carrie Brownstein has a cult following, which may not be large enough to bring it an Emmy. As with most of its rival nominees this year, “Portlandia” has not had a singular breakout moment. However, the singular quirkiness of the series (meant as a term of enormous respect) may make it the #1 choice of enough viewers to carry it across the finish line.

Election years are always good ones for “SNL,” and with Darrell Hammond‘s Trump, Kate McKinnon‘s Clinton and Larry David‘s Sanders, they’ve enjoyed a bountiful year of cold opens.  Colin Jost and Michael Che seem to have finally clicked as a team on “Weekend Update.” But the writing in the sketches as a whole has been up and down in quality (just like any other “SNL” season).  Can the good outweigh the bad and lead this NBC staple to another Emmy win in this race?