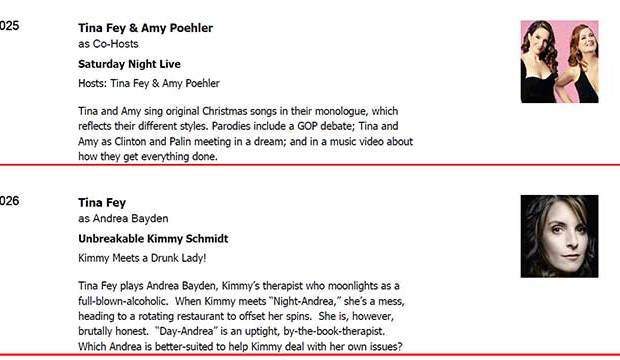 The Emmys are the only major awards show that posts their complete ballot online for public consumption. Every year, our fearless readers pour through the literally hundreds of pages to search for major shockers or unexpected surprises. Scroll down to see the Top 5 Emmy ballot jawdroppers uncovered by Gold Derby this year. (Visit our forums for more and to view the link to the 2016 Emmy ballot.)

Join the Emmy Awards ballot discussion in our message boards

Tina Fey and Amy Poehler for Best Comedy Guest Actress
These comedy BFFs co-hosted the Christmas episode of “Saturday Night Live” together, but we didn’t expect the TV academy would allow them to submit their names on the ballot as a team. (See photo above.) Since Fey is also a contender for her guest arc on Season 2 of “Unbreakable Kimmy Schmidt,” does that mean Fey could potentially compete against herself in this category?

Johnny Depp for Best Movie/Mini Actor
Funny or Die’s satirical telefilm “Donald Trump’s The Art of the Deal: The Movie” is on the ballot and so is movie star Depp who plays the presidential candidate in his 1980s heyday. Depp is a three-time Oscar nominee, but he’s never contended at the Emmys before. A nomination for Depp here would be yuuuuge.

Josh Charles for Best Drama Guest Actor
The former two-time nominee for “The Good Wife” (supporting in 2011 and 2014) may have been killed off two seasons ago, but that’s not stopping CBS from submitting his ghost on the Emmy ballot. Charles’ Will Gardner appeared in the series finale this spring to say an emotional goodbye to Julianna Margulies‘ Alicia Florrick. Might tears lead to votes?

Fred Armisen and Carrie Brownstein for Best Comedy Actor/Actress
In the past, “Portlandia” stars Armisen and Brownstein competed in the supporting races (with Armisen earning a nom in 2014), but this year they’re trying their luck in lead. Since Armisen is already on the supporting ballot for “Documentary Now,” he likely didn’t want to split the vote with himself or confuse voters.

Peter Capaldi for Best Drama Actor
For the first time in the long history of “Doctor Who,” the popular British sci-fi show is finally on the Emmy ballot. Current doc Capaldi, who’s starred since 2015, is now eligible in the Best Drama Actor race. Can he get nominated along the likes of frontrunners Kevin Spacey (“House of Cards”), Bob Odenkirk (“Better Call Saul”) and Rami Malek (“Mr. Robot”)?

How did Tina Fey and Amy Poehler do as 2021 Golden Globes hosts? [POLL]