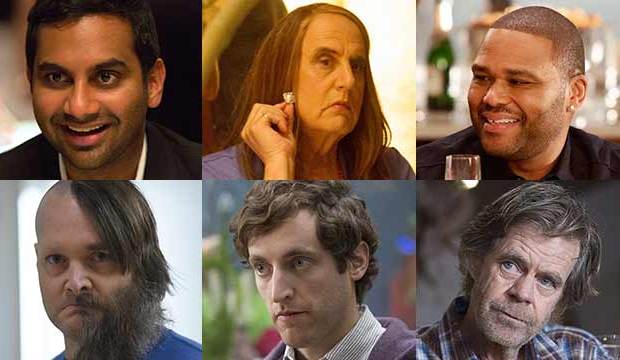 Anderson is nominated for the second straight year in this category and also contends as one of the “black-ish” producers for Best Comedy Series. He plays Andre “Dre” Johnson, an advertising executive trying to pass along his urban upbringing to seemingly uninterested kids. According to the official ABC listing for his episode “Hope”: “When the kids ask some tough questions in the midst of a highly publicized court case involving alleged police brutality and an African-American teenager, Dre and Bow are conflicted on how best to field them.”

Ansari is a first-time nominee this year and also has bids for producing, directing, and writing his freshman comedy series “Master of None.” On the show he plays Dev Shah, a commercial actor living and working in New York City. According to the official Netflix listing for his episode “Parents”: “First-generationers Dev and Brian try to show their appreciation for their immigrant parents at a joint family dinner.” Click here to watch our recent chat with Ansari.

Forte also contends again in this category for a second year running for “The Last Man on Earth”; he has three previous nominations in his career. He plays Phil “Tandy” Miller, who once believed he was the final person living after a virus has wiped out the population in 2019. According to the Fox listing for his episode “30 Years of Science Down the Tubes”: “Phil and Mike grow closer than ever and the whole Malibu group gets a big friggin’ surprise.” Click here to watch our recent chat with Forte.

Macy has a third straight nomination in this category for “Shameless,” bringing his career total to 12 with two wins in 2003 for the telefilm “Door to Door.” He plays Frank Gallagher, a freeloader, drunk, drug addict and almost-always deadbeat father. According to the Showtime listing for his episode “I Only Miss Her When I’m Breathing”: “Frank is struggling with the loss of a loved one. Fiona gets a promotion at the diner. Mickey is handling business behind bars. Debbie is making a decision with her pregnancy.” Click here to watch our recent chat with Macy.

Middleditch is finally recognized by voters as a rookie nominee for the third season of “Silicon Valley.” He plays Richard Hendricks, a shy computer coding genius who struggles with the demands of the corporate world. According to the HBO listing for his episode “The Empty Chair”: “Richard grows increasingly anxious over the state of Pied Piper as tech-buzz builds around Jack’s dismissal and possible replacements.”

Tambor is the reigning champ in this category for “Transparent” and now has his eighth career nomination. He plays Maura Pfefferman, a retired college professor who recently transitioned into a woman. According to the Amazon listing for his episode “Man on the Land”: “Maura makes a new friend and has a rude awakening at the music festival; Sarah experiences liberation from an unlikely source; Ali makes an unexpected journey to the past.”