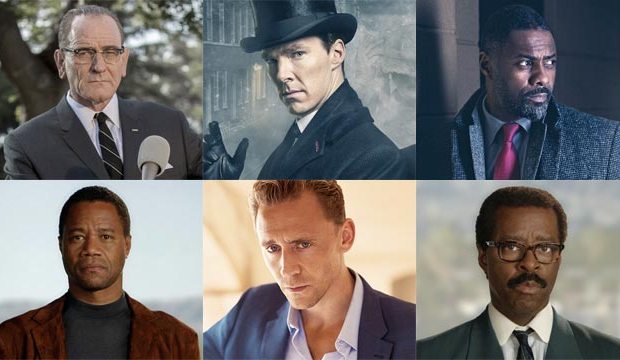 After winning six Emmy Awards for “Breaking Bad” (four acting, two producing) and a Tony in 2014 for playing President Lyndon B. Johnson in “All the Way,” Bryan Cranston is en route to winning Emmy #7 for the HBO adaptation of that play. If anyone can stop him in the Best Movie/Mini Actor race it will be another Tony champ, Courtney B. Vance (“The Lucky Guy”), who just earned his first Emmy bid for his portrayal of attorney Johnnie Cochran in the FX limited series “The People v. O.J. Simpson.”

Meanwhile, recent “Trumbo” Oscar nominee Cranston has the backing of two experts: Eric Deggans (NPR) and Adnan Virk (ESPN). If Emmy voters are aware that Cranston is a producer on “All the Way,” perhaps they’ll decide to give him the Best TV Movie prize and somebody else, like Vance, the acting award.

Also watch out for Benedict Cumberbatch. Remember, he shocked Emmy watchers in 2013 when he won this race for “Sherlock: His Last Vow.” Can he stage another Emmy coup with “Sherlock: The Abominable Bride”?

Recent double SAG winner Idris Elba (“Beasts of No Nation” and “Luther”) has been nominated thrice for BBC’s “Luther” at the Emmys (2011, 2012, 2014). Thanks to his much-publicized Oscar snub for “Beasts of No Nation,” perhaps his time has finally come in the Emmy spotlight.

Rounding out the list, tabloid headliner Tom Hiddleston (“The Night Manager”) earned his first major career nomination this year for the AMC program and Vance’s co-star Cuba Gooding Jr. could earn an Emmy to keep company with  his 1996 Oscar for “Jerry Maguire.”

Paws what you are doing and check out this featurette about the film adaptation of 'Cats' [WARNING: NO…

Tony champ Bryan Cranston ('Network') on threats against our rights: 'It's important to keep sounding…

Amazon Prime Video schedule: Here's what is coming and leaving in June 2019

The man behind the 'Boyz': Ground-breaking black filmmaker John Singleton dead at 51 [WATCH…

7th heaven? Benedict Cumberbatch could tie this Emmy record with a nomination for 'Brexit'