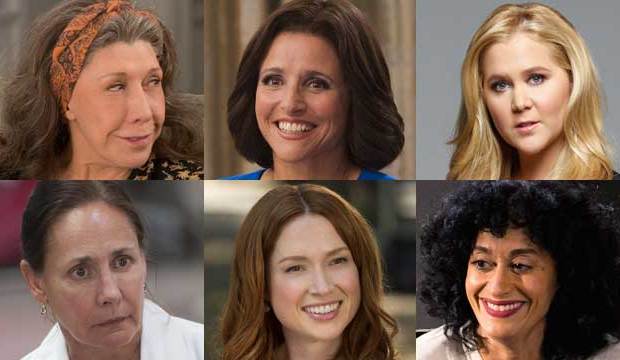 Kemper is a first-time nominee for playing “Unbreakable Kimmy Schmidt”‘s title character, a young woman who was kidnapped into a cult for many years and is now enjoying a new life in New York. According to the official Netflix listing for her episode “Kimmy Goes to a Hotel”: “On Fake Christmas, Kimmy and Dong take a trip to the Poconos, and a Jewish family claims that Jacqueline’s prized Mondrian is rightfully theirs.” Click here to watch our video chat with Kemper.

Louis-Dreyfus is the four-time reigning champ in this category and is also nominated for producing “Veep” in the Best Comedy Series category. She plays President Selina Meyer, a woman impatiently waiting election results to win the office for the first time on her own. According to the HBO listing for her episode “Mother”: “While Selina addresses a crowd at a small New Jersey wind farm, Gary gets a text that Selina’s mother is in the hospital following a stroke. Selina hardly reacts to the news as their relationship was fraught with tension and animosity.”

Metcalf is a three-time Emmy winner for “Roseanne” (1992-94) who has three acting nominations this year (also for “The Big Bang Theory” and “Horace and Pete”). For “Getting On,” she plays Dr. Jenna James, an uptight and sometimes self-centered director medicine. According to the HBO listing for her episode “Am I Still Me?”: “Dr. Jenna James arrives at the hospital, smartly dressed for her symposium that afternoon. She believes she’s a shoo-in for the coveted Helen Tillman prize for geriatrics that will be given that evening. Jenna calls her husband Richard to share her excitement about the symposium, and he informs her that her mother just died.”

Ross just reaped her first career Emmy nomination for “black-ish.” On the comedy, she plays Dr. Rainbow Johnson, a surgeon married to an advertising executive. According to the ABC listing for her episode “Sink or Swim”: “After Dre notices that his neighbor Janine has never invited his family to any of her pool parties, he assumes she is racially stereotyping them as a family that doesn’t swim.”

Schumer won her first Emmy last year as producer of “Inside Amy Schumer,” the Best Variety Sketch Series champ. She has a total of six nominations this time around for “Inside Amy Schumer,” her variety special “Amy Schumer: Live at the Apollo,” and guest hosting “Saturday Night Live.” According to the official Comedy Central listing for her episode “Welcome to the Gun Show”: “Amy hosts a home shopping show for gun enthusiasts, faces the wrath of a new Twitter feature and lands a role on ‘Game of Thrones.'”

Tomlin now has her 23rd career Emmy nomination with five past writing victories and one for narration. It’s her second straight bid in this category for “Grace and Frankie,” where she plays Frankie Bergstein, a hippie art teacher whose husband left her for another man. According to the Netflix listing for her episode “The Test”: “Frankie has difficulty passing the test to renew her driver’s license. Grace attempts to amp up her social life by reconnecting with old friends.”