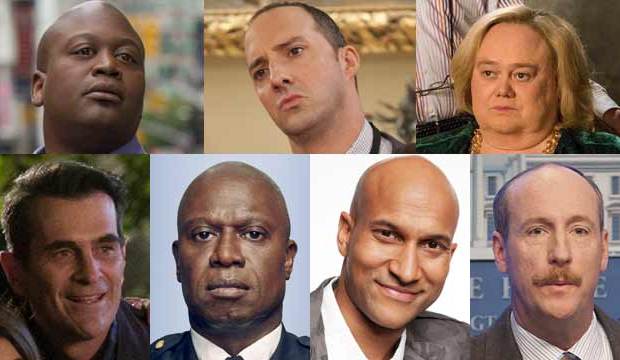 After a long stand-up comedy career, this is Anderson’s first Emmy nomination. He plays Christine Baskets, the loving mother of Chip and Dale who is constantly concerned with appearances and embarrassed by her sons. According to the official FX listing for his “Baskets” episode “Easter in Bakersfield”: “The Easter holiday brings more strife, but also some understanding, to the Baskets family.”

Braugher now has three straight nominations in this category for “Brooklyn Nine-Nine” as Captain Ray Holt, the hard-nosed precinct’s commanding officer who was forced to transfer into public relations. He is a two-time Emmy winner for his dramatic work (“Homicide,” 1998; “Thief,” 2006) among his 10 career nominations. According to the Fox listing for his episode “The Oolong Slayer”: “Jake and Holt both get in trouble when they work on a serial killer case together in secret. The Vulture asks Amy and Rosa set up his birthday party. Boyle introduces Terry to a delicious new snack.”

Burrell is the only member of his cast to be nominated for all seven seasons of “Modern Family” and won this category in 2011 and 2014. He plays Phil Dunphy, a top notch realtor and befuddled father of three. According to the official ABC listing for his episode “The Party”: “Manny and Luke are in charge of babysitting Lily so that the adults can enjoy a day to themselves. Claire and Gloria have a lovely trip to the spa planned; Phil and Mitch nerd out at the movies; and Jay and Cam go to a sports bar to watch the big fight.”

Hale is the reigning champ in this category for “Veep” and also won in 2013. He plays Gary Walsh, loyal personal aide and confidant to the U.S. President. According to the HBO listing for his episode “Inauguration”: “Selina retires to the Oval to watch the Senate vote, which results in another tie. The final decision is in the hands of current Vice President Doyle, who votes for Senator Laura Montez. Amy’s intel suggests Doyle orchestrated the whole thing because he is getting Secretary of State. Gary melts down, accusing the entire team of letting ‘that magnificent woman’ down.” Click here to watch our video chat with Hale.

Key reaped a second consecutive bid in this category and has additional nominations this year for producing and writing his variety sketch series “Key and Peele.” According to the Comedy Central listing for his episode “Y’all Ready for This”: “A football team hypes up before a game; President Obama and Luther meet Hillary Clinton.”

Walsh is a rookie nominee for “Veep” who plays the White House press secretary, a man whose commitment to work is questionable and whose time is also now taken by three new children in his family. According to the HBO listing for his episode “Kissing Your Sister”: “As Catherine’s documentary is completed, Congress decides who will be President. Through surreptitious filming, Selina’s plan to fire Mike after the inauguration is exposed. Catherine visits Mike at home and sees how he and Wendy have been preparing for a baby through the twists and turns of the surrogacy and adoption.” Click here to watch our video chat with Walsh.