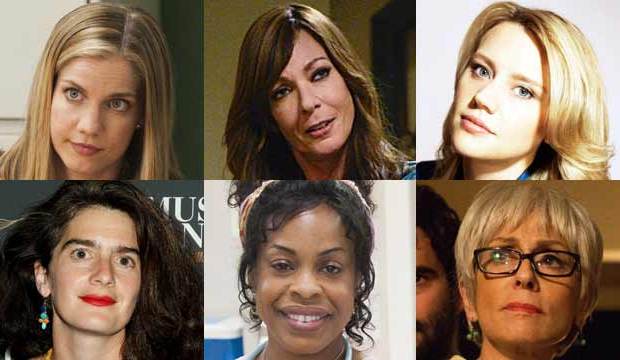 Chlumsky now has her fourth consecutive nomination for “Veep” playing Amy Brookheimer, trouble-shooting presidential campaign manager. According to the HBO listing for her episode “C**tgate”: “Dan, on Amy’s advice, volunteers to run Jonah’s campaign. Amy meets with Mike to ask if he knows who called the president a c**t, but quickly scraps the charade and admits it was her.”

Hoffmann is a two-time contender in this category for “Transparent” and was also nominated last year for her guest role on “Girls.” She plays Ali Pfefferman, the youngest adult child in her family who is perpetually unemployed and immature. According to the Amazon listing for her episode “Bulnerable”: “Ali finds herself a little too close to Leslie when she seeks Leslie’s advice on her UCLA application; Josh confronts Shelly about the past; Sarah uses a hard-won date night to explore some of her sexual fantasies.”

Janney is on the verge of making Emmy history. She already has seven acting wins, tying her for second place on the all-time leaderboard with Edward Asner and Mary Tyler Moore. An eighth primetime victory would equal the achievement of all-time champ Cloris Leachman for acting wins. She has prevailed in this category two straight years playing Bonnie Plunkett, a joyful yet cynical recovering alcoholic and mother of an adult daughter. According to the official CBS listing for her “Mom” episode “Terrorists and Gingerbread”: “Bonnie’s mother Shirley (Ellen Burstyn) suddenly wants to be a part of her and Christy’s lives.” Click here to watch our recent chat with Janney.

Light has her first nomination in this category for “Transparent” and her second career primetime bid; she won two Daytime Emmys in 1980 and 1981 for “One Life to Live.” She plays Shelly Pfefferman, the ex-wife of a man who recently transitioned into a woman in his older years. According to the Amazon listing for her episode “Flicky-Flicky Thump-Thump”: “Josh has a pool party for his new band, but he and his siblings are caught off-guard when Maura and Shelly arrive together; Ali reconnects with an old friend; Sarah finds her past catching up with her. ” Click here to watch our recent chat with Light.

McKinnon has her third straight Emmy bid in this category as part of the “Saturday Night Live” ensemble. According to the official NBC listing for her portion of the episode hosted by Ariana Grande, McKinnon played Hillary Clinton, Tilda Swinton, a nun from “The Sound of Music,” and a mermaid. Click here to watch our recent chat with McKinnon.

Nash contends in this category for a second year running for “Getting On.” She plays Didi Ortley, a return-to-work nurse who is more empathetic and less likely to follow the rules than the other nurses. According to the HBO listing for her episode “Don’t Let It Get in You or on You”: “Dawn meets with her kidney doctor to have a dialysis port put into her arm. Didi argues with her sister-in-law Yvette on the phone about moving their mother-in-law, Viv, out of her nursing home.” Click here to watch our recent chat with Nash.