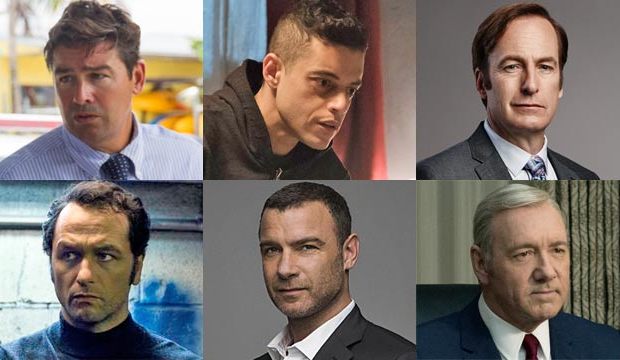 Chandler won this category in 2011 for “Friday Night Lights,” and this is his fifth career bid. For “Bloodline” he plays John Rayburn, a detective and local deputy in Florida with deep family secrets. According to the Netflix listing for his episode “Part 23”: “Marco scrambles to get Eric immunity. Nolan recalls meeting Robert. Meg and Kevin turn against John, who pursues the one man who can alter his fate.”

Malek received his first-ever Emmy nomination for playing Elliot Alderson on “Mr. Robot.” According to the official USA Network listing for his episode “eps1.0_hellofriend.mov”: “Elliot, a cyber-security engineer by day and vigilante hacker by night, is recruited by a mysterious underground group to destroy the firm he’s paid to protect.” Click here to watch our recent chat with Malek.

Odenkirk reaped a second straight bid in this category and is also nominated as a producer of “Better Call Saul.” He is a past Emmy winner as a writer for both “Saturday Night Live” and “The Ben Stiller Show.” On this “Breaking Bad” spin-off, he plays Jimmy McGill (soon to become Saul Goodman from “Breaking Bad”), a small-time New Mexico lawyer. According to the AMC listing for his episode “Klick”: “Jimmy is forced to make a hard choice. Mike takes matters into his own hands. Hamlin relays shocking news while Chuck’s condition continues to evolve.” Click here to watch our recent chat with Odenkirk.

Rhys is a rookie nominee for “The Americans” who plays Philip Jennings, a deeply embedded Soviet KGB spy living in America in the early 1980s. According to the FX listing for his episode “The Magic of David Copperfield V,” which he also directed: “The Jennings hit their breaking points as they try to handle their local agents such as Martha.”

Schreiber has a repeat nomination in this category for “Ray Donovan” and had a previous bid in 2000. He plays the title character, a fixer for a powerful law firm who uses threats and bribes to create the outcomes they want. According to the Showtime listing for his episode “Exsuscito”: “Ray finds out that Bridget is involved with her teacher and he goes looking for them. The Minassians move to punish Mickey for his betrayal and open fire at Mickey’s apartment, resulting in Terry being seriously wounded. Teresa tells Bunchy that he’s going to be a father.” Click here to watch our recent chat with Schreiber.

Spacey has a fourth straight nomination in this category and is also nominated as a producer for “House of Cards.” That brings his career total to 10 Emmy bids with no wins so far. He plays Frank Underwood, the devious U.S. President fighting to put his marriage back together while running for election. According to the Netflix listing for his episode “Chapter 52”: “As the hostage situation continues, Claire secretly negotiates with an extremist leader. Frank confronts Hammerschmidt.”