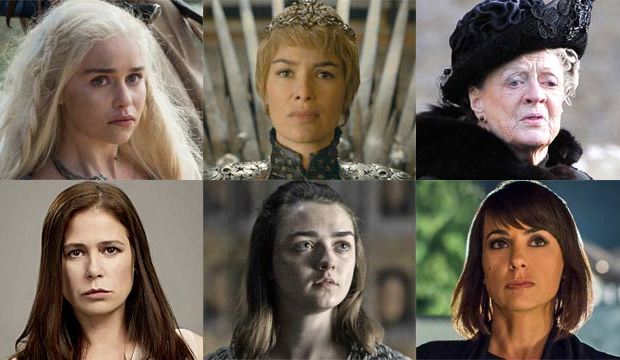 Clarke now has her third nomination for “Game of Thrones” playing Daenereys Targaryen, the Mother of Dragons and exiled princess of her family’s dynasty. According to the official HBO listing for her portion of the episode “Book of the Stranger”: “Inside the temple, Daenerys is introduced to a young priestess who escorts her outside for some air. Emerging from the shadows, Daario grabs the girl, but Dany commands him not to kill her. The following evening, Danaerys faces the khals. Calmly, she pushes over lit braziers, setting fire to the temple, and serenely watches the men burn. Emerging from the flames naked and unburnt.”

Headey is a three-time nominee in this category who plays the cunning former queen Cersei Lannister on “Game of Thrones.” According to the HBO listing for her portion of the episode “The Winds of Winter”: “The day of Cersei’s and Loras’s trial has arrived. Margaery, sensing Cersei has outplayed them, tries to convince the High Sparrow to evacuate the Sept. An explosion incinerates the Sept, and everyone inside. Watching from her chambers, Cersei smiles with satisfaction and toasts the destruction of her enemies.”

Smith has won Emmys twice (2011, 2012) for her role as Violet Crawley, Dowager Countess in a wealthy British family of the 1920s for “Downton Abbey.” This is her ninth career nomination with a third win for “My House in Umbria” (2003). According to the PBS listing for “Episode 6.06”: “Downton Abbey opens its doors to the public for charity, Barrow’s actions are misconstrued, Mary and Henry’s romance blossoms, and tensions between Cora and Violet reach a dramatic climax.”

Tierney’s only previous Emmy nomination was in 2001 for “E.R.” in this same category. She won a Golden Globe earlier this year for “The Affair” playing Helen Solloway, who left her husband after 20 years and is a deft manager of her four children’s busy lives. According to the official Showtime listing for “Episode 204”: “As pressures in Helen’s life mount, one innocent mistake leads to outrageous consequences. Meanwhile, a court order presents a dire setback for Noah and Alison.” Click here to watch our recent chat with Tierney.

Williams is a rookie Emmy nominee for “Game of Thrones” who plays Arya Stark, the young daughter of Lord Stark who has great resourcefulness and cunning, becoming increasingly ruthless. According to the HBO listing for her portion of the episode “No One”: “Lady Crane finds Arya still bleeding profusely, hiding in the corner. She brings Arya to her personal quarters to tend to the girl’s injuries. She invites Arya to join the acting troupe, but Arya, aware she will be hunted, speaks of wanting to see what’s west of Westeros.”

Zimmer is a rookie Emmy nominee who plays Quinn King, the demanding executive producer of a reality dating television show on “UnREAL.” According to the Lifetime listing for her episode “Mother”: “Broke and drowning under a pile of bills, Rachel is forced to ask her mother for financial support. Meanwhile, Quinn tends to Chet after a health scare; and Lizzie discovers details about Jeremy and Rachel’s history.” Click here to watch our recent chat with Zimmer.