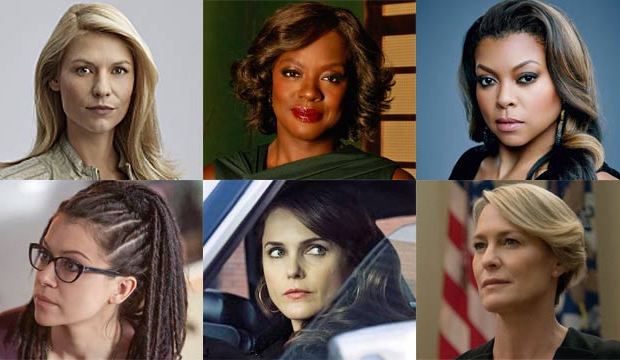 Danes now has her fifth straight nomination for “Homeland,” having won twice before in 2012 and 2013 for this category. She is also nominated as one of the producers for Best Drama Series, bringing her career total to nine Emmy bids. She plays Carrie Mathison, a former intelligence officer now working as head of security for a charitable organization. According to the official Showtime listing for her episode “Super Powers”: “Jonas and Carrie revisit her past as she tries to find who is trying to kill her. Quinn stalks his prey.”

Last year, Davis became the first African American to win this award, prevailing on her first-ever Emmy bid. She plays Annalise Keating on “How to Get Away With Murder,” a law professor and criminal defense attorney in Philadelphia. According to the official ABC listing for her episode “There’s My Baby”: “The Keating 5 are called into questioning by A.D.A Denver about the night Emily Sinclair was murdered. Meanwhile, Caleb goes missing as the manhunt for Philip intensifies. In flashback, Annalise’s tactics in the Mahoney case leads to a devastating result.” Click here to watch our recent chat with Davis.

Henson won a Golden Globe earlier this year for playing Cookie Lyon on “Empire,” an outspoken woman who went to prison after helping to create a famous record label with her husband. This is her second consecutive nomination in this category and third overall. According to the Fox listing for her episode “Rise by Sin”: “Hakeem struggles to find a place for his fiancé, Laura, in his career and family; Cookie reveals the truth about Freda’s father to Jamal; Jamal makes a sacrifice for Lucious.” Click here to watch our recent chat with Henson.

Maslany was a first-time nominee in 2015 for “Orphan Black.” She plays a variety of clones on the sci-fi program, including Sarah, Alison, Cosima, Helena, Rachel, M.K., and Krystal. According to the BBC America listing for her episode “The Antisocialism of Sex”: “Sarah regresses to old habits while struggling to cope with the consequences of her decisions — reconnecting with Beth on a dark night of the soul. Back at the lab, Cosima, haunted by vicious memories and news of Delphine, attempts a dangerous Hail Mary to find a cure.” Click here to watch our recent chat with Maslany.

Russell is a rookie nominee for “The Americans” who plays Elizabeth Jennings, a deeply embedded Soviet KGB spy living in America in the early 1980s. According to the FX listing for her episode “The Magic of David Copperfield V”: “The Jennings hit their breaking points as they try to handle their local agents such as Martha.”

Wright has a fourth straight nomination in this category for playing Claire Underwood, the cunning First Lady on “House of Cards” with ambitious plans to win a major office of her own. According to the Netflix listing for her episode “Chapter 49”: “As Frank deals with a new threat to his candidacy, Claire has doubts about their plan. Claire faces a difficult decision concerning her mother’s health.”