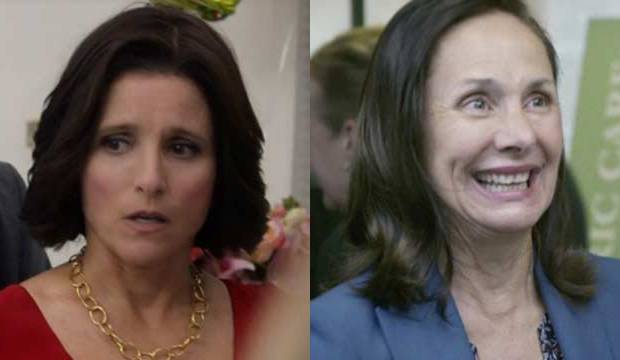 Gold Derby has exclusively learned the episode submissions to Emmy Awards voters by two of the 2016 nominees for Best Comedy Actress. Julia Louis-Dreyfus is entering the “Veep” episode titled “Mother.” And Laurie Metcalf has selected the “Getting On” episode titled “Am I Still Me?.”

Louis-Dreyfus is the four-time reigning champ in this category and is also nominated for producing in the Best Comedy Series category. She plays President Selina Meyer, a woman impatiently waiting election results to win the office for the first time on her own. According to the HBO listing for her episode: “While Selina addresses a crowd at a small New Jersey wind farm, Gary gets a text that Selina’s mother is in the hospital following a stroke. Selina hardly reacts to the news as their relationship was fraught with tension and animosity.”

Metcalf is a three-time Emmy winner for “Roseanne” (1992-94) who has three acting nominations this year (also for “The Big Bang Theory” and “Horace and Pete”). She plays Dr. Jenna James, an uptight and sometimes self-centered director medicine. According to the HBO listing for her episode: “Dr. Jenna James arrives at the hospital, smartly dressed for her symposium that afternoon. She believes she’s a shoo-in for the coveted Helen Tillman prize for geriatrics that will be given that evening. Jenna calls her husband Richard to share her excitement about the symposium, and he informs her that her mother just died.”