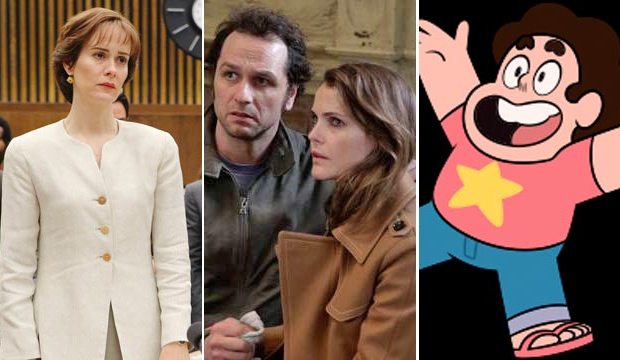 “Sarah Paulson (‘The People v. O.J. Simpson’) is long overdue. It’s her time,” says our forum poster Alex Meyer about which Emmy win would make him the happiest. “The Emmys finally rewarded Jon Hamm last year, so they should reward Paulson this year.” What other stars and programs are among our readers’ must-wins for the 2016 Emmy Awards? Read a sampling of our posters’ comments below, and click here to join the discussion where the feisty debate is still underway.

Adam Rock: “The Americans” even being nominated seemed like a miracle to me so I’m not exactly holding my breath, but if it wins ANYTHING (other than Margo Martindale of course) that would make it for me.

Teridax: Short-Form Animated Program “Steven Universe” (“The Answer”). That’s the ONLY one win that matters to me, the rest can literally go any way at all. “Adventure Time” has already gotten its overdue recognition last year, so now it’s time to recognize “Steven Universe,” the GREATEST SHOW ON TELEVISION, animated or otherwise, in my honest opinion.

OnTheAisle: This year the program I found myself drawn back to watching over and over again is “Carpool Karaoke.” James Corden brings a true joie de vivre and visibly relishes the opportunity to ride in a car with Adele singing together. Those 19 minutes of film feels like a real glimpse into Adele’s true self. She has moments of being perplexed by Corden’s enthusiasm but ultimately embraces his bubbling adoration.

Mihael Crncec: These three wins would make me not care about anything else: Julia Louis-Dreyfus, Judith Light and Jean Smart.

Janos Varga: The one win that would make me really happy is Louie Anderson for “Baskets,” but I would be also happy if “Mr. Robot” can win anything it’s nominated in, even in one category.

forwardswill: Maggie Smith winning if she attended would make me unspeakably happy. Otherwise, Kerry Washington and Olivia Colman, particularly the former given how much of a shock it would be, would make me very happy. I’d also like to see Allison Janney keep winning until “Mom” breaks through.