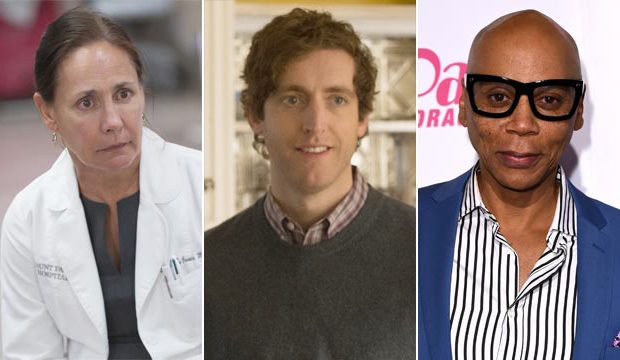 Shows new and old triumphed in the 2016 Emmy Awards nominations Thursday morning, but not all were as expected. Scroll down to see the Top 10 nominees that hardly anybody saw coming, including one TV legend who surprised us not once, not twice, but three times. For the complete list of Emmy nominations, click here.

Laurie Metcalf
A three-time winner for “Roseanne” (1992, 1993, 1994), Metcalf heard her name called three more times today for “Getting On” (Best Comedy Actress), “The Big Bang Theory” (Best Comedy Guest Actress) and “Horace and Pete” (Best Drama Guest Actress). And for the most part, our Emmy experts were completely caught off-guard by the TV vet’s trio of new nominations.

Thomas Middleditch
This “Silicon Valley” actor is now the first person from his three-season show to be nominated for an acting Emmy. Let that be a lesson for his popular co-stars T.J. Miller, Kumail Nanjiani, Martin Starr and Zach Woods — it can be done!

RuPaul Charles
Logo’s long-running reality show earned its first-ever nomination last year for Best Makeup, but this year it doubled that with noms for Best Costumes and Best Reality Host for RuPaul. At this rate, will the show earn even more bids next year, including the all-important Best Reality-Competition Series?

“American Ninja Warrior”
NBC’s eight-year-old cult hit finally received its first Emmy nom this year, and it’s a biggie: Best Reality-Competition Series. “Ninja” replaces “So You Think You Can Dance” on the list of nominations, which was on a five-year nomination streak in this category.

Ryan Seacrest
If parting is such sweet sorrow, “American Idol” host Seacrest was just given a great big bear hug by the Emmys. While the everyman host never won for hosting Fox’s “American Idol,” he does have a trophy on his mantel for producing reality series “Food Revolution” (2010).

Maisie Williams
This “Game of Thrones” favorite may have been ranked low on our experts’ list of likely nominees, but she always topped the list of performers who were most deserving of a trophy. Now, this teenage star finally has an Emmy nom to her name for the iconic role of Arya Stark on the HBO fantasy epic.

David Schwimmer
From the goofy Ross on “Friends” to the emotional Kardashian patriarch on “The People v. O.J. Simpson,” Schwimmer has had an incredibly successful career on television. While we didn’t expect him to earn a nomination for “O.J.,” he might now be a threat to win that tough Movie/Mini Supporting Actor race.

“Comedians in Cars Getting Coffee”
Crackle’s five-season show hosted by Jerry Seinfeld just entered the big leagues at the Emmys, earning a nomination for Best Variety Talk Series over favorites like “The Daily Show with Trevor Noah,” “The Late Show with Stephen Colbert” and “Full Frontal with Samantha Bee.”

“Late Late Show with James Corden”
The other new kid on the Variety Talk block is James Corden, whose “Late Late Show” was also nominated in the Variety Special race for its “Carpool Karaoke Prime Time Special.” Something tells us this recent Tonys emcee will be singing a happy tune the next time he’s driving down Hollywood Blvd.