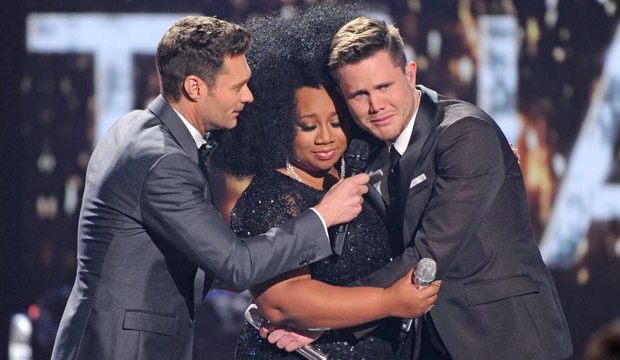 Ryan Seacrest hosted “American Idol” for all 15 seasons, but never won an Emmy Award for his efforts. The TV academy didn’t introduce the Best Reality Host category until 2008, which was Season 7 for the departing Fox ratings juggernaut. Seacrest reaped six consecutive bids beginning that year but never prevailed.

Seacrest was smart in not entering the series finale where he would’ve been upstaged by all of the returning winners and contestants. Instead, his submission to Emmy judges is the “Kelly Clarkson Week” episode where the Top 10 performed. When the show’s iconic inaugural winner sings near the end of the episode, Seacrest is given the perfect opportunity to showcase what he does best — putting the contestants at ease. As everyone, including himself, begins to cry Seacrest rushes to Clarkson’s side to comfort her. Of all of the reality hosts nominated, his episode tugs the most at the heartstrings.

Were Seacrest to win this year, it would be a fitting tribute to a pioneer of this TV genre. In 2008, reality shows were so hot that the TV academy tapped the inaugural five nominees for Best Reality Host to emcee the Emmys. Seacrest was the frontrunner to win that first race against Bergeron, Klum, Howie Mandel (“Deal or no Deal”) and Jeff Probst (“Survivor”). But Probst pulled off an upset and won their next three match-ups as well.

How was Probst able to sustain this winning streak? His episodes were far superior to his competitors. They always portrayed him as a likable hero in the middle of the action, often coming to the rescue of a contestant, or taking charge of the situation. Next to him no other nominee stood much of a chance. Seacrest’s episodes, by comparison, often seemed ordinary. He would introduce the musical performances, banter with the judges, or console eliminated contestants.

When Probst was snubbed in 2012, it looked like Seacrest would finally win. Bergeron was back for the fifth time as well while Phil Keoghan (“The Amazing Race”) was in contention for a fourth consecutive year, Cat Deeley (“So You Think You Can Dance”) was in the running for a second year and Emmy darling Betty White (“Betty White’s Off Their Walkers”) was nominated for the first year of her show.

Seacrest had won an Emmy in 2010, for producing “Jamie Oliver’s Food Revolution,” and was expected to finally win for the gig that made him a household name. But Bergeron prevailed. The following year, the team of Klum and Gunn won for hosting “Project Runway” against Bergeron, Deeley, Seacrest, White and newcomer Anthony Boudrain (“The Taste”).

Since then, “American Idol” suffered from constantly changing judging panels and repetitive song choices. Viewers gravitated to “The Voice” and returned to scripted television. Seacrest’s association with the much-mocked Kardashian reality shows didn’t help his profile with Emmy voters. As such, it wasn’t a shock when he was snubbed for the past two years running.

Can Seacrest ride this wave of nostalgia and win now that he’s back in the race? For a category that has only been around eight years there is a precedent. Klum, as the lone host of “Project Runway,” contended from 2008 to 2010. Then, after being snubbed for two years, she returned (with co-nominee Gunn) and won.