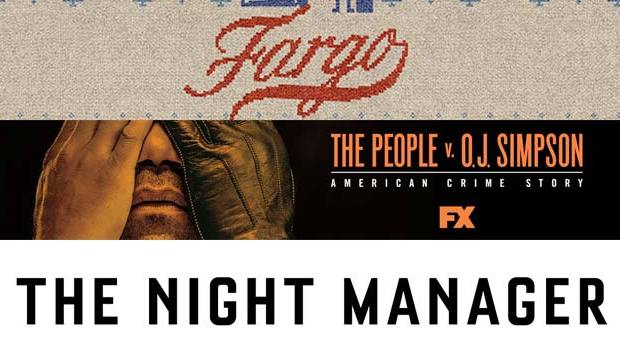 This year, there are six slots for Best Movie/Limited Series Writing at the Emmy Awards, but only three programs are represented as FX’s “The People v. O.J. Simpson” has three nominations, FX’s “Fargo” has two and AMC’s “The Night Manager” has one. According to our Emmy experts derived from major media outlets, the top two scripts are “The Race Card” from “O.J.” and “Loplop” from “Fargo.” Do you agree with our experts’ predictions?

“The Race Card” has leading 2/1 odds to win the writing award for “O.J.” Penned by Joe Robert Cole, this fifth hour of the 10-hour limited series begins the long-awaited murder trial. It has the support of three experts who’ve chimed in early with their Emmy predictions — Eric Deggans (NPR), Matthew Jacobs (HuffPo) and Tom O’Neil (Gold Derby) — and is highly ranked by the other journalists taking part in our panel.

The third nominee from “O.J.” is the pilot episode that started it all, titled “From the Ashes of Tragedy.” Oscar nominees Scott Alexander and Larry Karaszewski (“The People vs. Larry Flynt” in 1996) are the co-writers who adapted the program from Jeffrey Toobin‘s book. They have five experts forecasting them to win: Joyce Eng (TV Guide), Matt Roush (TV Guide), Paul Sheehan (Gold Derby), Anne Thompson (Indiewire) and Ken Tucker (Yahoo). However, with the other experts ranking them much lower, they’re in fourth place at 5/1 odds.

The other “Fargo” nominee, “Palindrome,” is written by showrunner Noah Hawley. Despite it being the much-anticipated finale that closed out Season 2, no experts predict it will prevail. Thus, it’s in fifth place in their rankings with 11/1 odds to win.

In sixth place is the sole contender that’s not on FX. All of “The Night Manager” episodes were adapted by David Farr, so he’s not nominated for a specific episode but instead the entire limited series. “The Night Manager” over-performed with 12 Emmy nominations, including key bids for Best Limited Series, Best Writing, Best Directing, Best Actor (Tom Hiddleston), Best Supporting Actor (Hugh Laurie) and Best Supporting Actress (Olivia Colman).