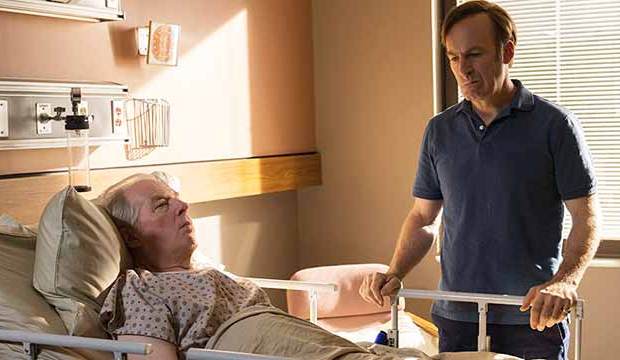 With Monday’s episode titled “Klick,” “Breaking Bad” prequel “Better Call Saul” wrapped up its second season by setting up yet another future conflict between ethically challenged lawyer Jimmy McGill (Bob Odenkirk) and his disapproving older brother/fellow attorney Chuck (Michael McKean). With a Rotten Tomatoes score of 94% approval for the sophomore year, will the AMC drama series get an even better haul of nominations for the 2016 Emmy Awards?

In the season finale, Jimmy admits to having sabotaged Chuck’s legal filing, as we saw in the previous episode, using nefarious (and felonious) means. The episode ends with the revelation that Chuck secretly recorded Jimmy’s confession. The segment was directed and co-written by original “Breaking Bad” creator Vince Gilligan.

For a show from the same creative minds who ended previous seasons of “Breaking Bad” with mid-air airplane collisions, poisoned children, and a guy’s face getting half blown off, “Better Call Saul” continues to set itself apart as a quieter, more tightly coiled version of its more high-octane predecessor. Will that fresh style help the program achieve multiple Emmy nominations again when they are announced on July 14? Last year’s freshman season reaped an impressive six bids, including for Best Drama Series, Best Drama Actor (Odenkirk), and Best Drama Supporting Actor (Jonathan Banks), but lost them all. That nomination in the top category was a feat even its widely acclaimed predecessor didn’t accomplish back in its first year in 2008.

“Saul” will almost certainly get multiple chances to take home its first Emmy this year. Let’s look at the better categories:

BEST DRAMA SERIES: A nod is as likely as McGill telling a lie in any given “Saul” episode. “Saul” ranks 4th in the Gold Derby predictions center, with 12 of our 15 experts expecting a second consecutive nomination. It lost last year’s race to “Game of Thrones.”

BEST DRAMA ACTOR: Make it two straight nods for Odenkirk. He ranks 3rd in the Gold Derby predictions center in this category (13 of our experts expect him to make the cut again this year). This year, he won’t have the misfortune of facing a revered and long-overdue actor (Jon Hamm, “Mad Men”) in his final year of eligibility for a TV classic. Odenkirk did solid work this season, convincingly portraying Jimmy’s struggles with the trappings of legal success, managing an honest relationship with a fellow attorney, and the strange mix of loyalty and resentment with his brother. All three struggles are on full display in the episode “Gloves Off,” which could be enough to sway some voters that they’d “Better Call Odenkirk” when it’s voting time.

BEST DRAMA SUPPORTING ACTOR: Of the four cast members AMC is submitting in this category, Banks is by far the likeliest candidate for a nomination. In addition to his nod last year, Banks was nominated in this category in 2013 for his final season on “Breaking Bad,” and previously back in 1989 for his role on the CBS cop show “Wiseguy.” He’s 2nd in the Gold Derby prediction center this year. His violent showdown with the pyscho drug dealer Tuco in “Gloves Off,” and the slow-burn intensity he displays in subsequent episodes as he deals with the aftermath, could land him in the winner’s circle. McKean is a potential wild-card. His portrayal of Chuck’s growing revulsion over his brother’s antics, and his own struggles to deal with the outside world, are given a thorough showcase in the season finale, “Klick.”

BEST DRAMA SUPPORTING ACTRESS: “Saul’s” only possible contender in this category is Rhea Seehorn. Her work this year as Jimmy’s aggrieved companion was exceptional, especially with the episode “Rebecca,” where Kim deals with the humiliation and fallout from another of Jimmy’s questionable ethical decisions. It cemented Seehorn as the show’s unsung hero in much the same way Anna Gunn‘s Skyler White became “Breaking Bad’s” moral center. Like Seehorn on “Saul”, Gunn got zero Emmy recognition for her contribution to “Bad’s” early days. But Gunn ended “Breaking Bad’s” run with three straight nominations and two wins. If Seehorn keeps going like this, her day at the Emmys will come, too.

BEST DRAMA GUEST ACTOR: Ed Begley, Jr., who portrayed Jimmy’s put-upon boss, is a six-time Emmy nominee for the 1980’s hospital show “St. Elsewhere.” His solid work on “Saul” — particularly the surprisingly sympathetic scene where he fires Jimmy in “Inflatable” — could help him earn a nod, too. Curiously, AMC’s list of actors it’s submitting in this category is missing a fan favorite from the “Breaking Bad” universe who made a much buzzed-about return this season. Mark Margolis was nominated in this category in 2012 for his explosive performance as the mute and wheelchair-bound original gangster Hector Salamanca. Salamanca returned to play a pivotal role in this season’s events and Margolis’ performance was as menacing as ever — and this time, we got to hear him speak! His reps might just submit him on their own.