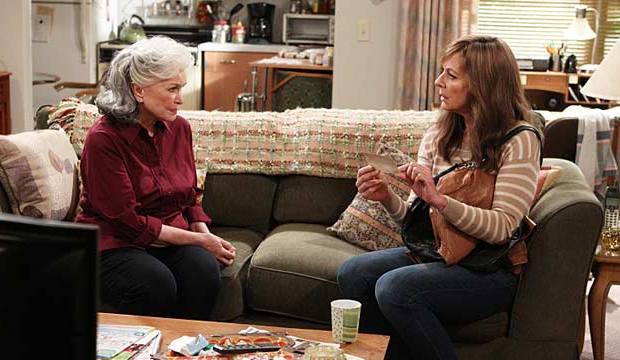 Look out, Cloris Leachman! Seven-time Emmy Awards champ Allison Janney is looking to match your all-time Primetime Emmys record of eight golden statues by winning a third consecutive Best Comedy Supporting Actress trophy for her turn as Bonnie Plunkett on “Mom.” This time around Janney has submitted the emotional episode titled “Terrorists and Gingerbread” of the CBS hit comedy to Emmy judges.

SYNOPSIS
In the Season 3 premiere episode, Bonnie is reconnected with her Mom (guest star Ellen Burstyn) via her daughter Christy (Anna Faris) who wants them all to have a relationship. However, Bonnie is not so forgiving of her mother giving her up to foster care at the age of four. She becomes even less forgiving after finding out a part of the reason was because the guy her mother was dating didn’t want children around.

For Bonnie not to dive back into drugs and alcohol, she takes up running to cope with the emotional situation. Will Janney win her third Emmy for this series? Let’s examine the pros and cons:

PROS
Janney brings it all: physical comedy, laughs, tears and a showcase of emotions. Though Bonnie may not be the best motherly example with Christy, what Janney does in making you feel for Bonnie wanting her mother only to find out a truth she can’t forgive is reason enough to just put Janney’s name down on that Emmy plaque once again.

She’s won seven Emmy awards. Seven. These voters seem to like, nay, love her a lot. And with two already in the bag for this role and an episode that has all that voters love (impact, range, hug-ability) there’s no thinking the lovefest won’t continue this year.

Some still argue that there may be some category fraud going on here. Though Faris is billed as the star of the show, Janney is seen by many as the star as well with just as much, if not more, screen time. Should she be in the lead category?