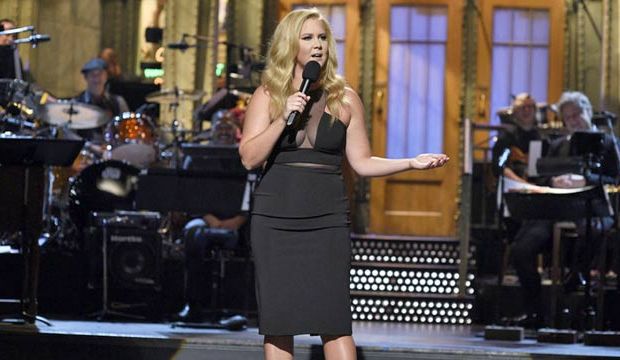 Amy Schumer had a career-changing 2015, between the one Emmy Award win (Variety Sketch Series) out of four nominations for her show “Inside Amy Schumer” and the box office and critical success of her film “Trainwreck.” Now, her six Emmy bids this year suggests that she has no signs of slowing down. Though Schumer is well-known among Emmy voters for “Inside Amy Schumer,” her best shot at an acting win this year is actually in the less competitive Best Comedy Guest Actress field where she’s nominated for her work as host of “Saturday Night Live.”

SYNOPSIS
Schumer’s episode aired on October 10, with musical guest The Weeknd. Unlike most hosts who often take supporting roles in a majority of their sketches, Schumer was front and center throughout the episode. Her opening monologue was on par with much of her stand-up routines and her featured sketches showed a range of the types of characters Schumer is best at — everything from a soft core porn-influenced school teacher to an aggressive party guest crashing a baby shower.

Also in the episode, she portrayed a gun-toting woman in a pro-NRA commercial, a cheerful flight attendant with gravity issues and a politically conservative child. With Schumer’s Emmy profile at a current high point, will voters take the opportunity to give her the comedy acting win they seem eager to bestow upon her? Let’s take a look at the pros and cons:

PROS
Schumer’s first skit of the episode, arguably her funniest, sets the bar high for an above average episode of “SNL.” In it, her and Vanessa Bayer play singing flight attendants who manage to each fly out of the cabin door mid-flight only to be pulled back somehow maintaining their corporate joy. The slapstick physicality of the skit mixed with great on-set chemistry with Bayer is why people still watch the show in its 41st season.

For voters that are eager to give Schumer a much-deserved acting win, this is their chance. Over in the Best Comedy Actress race for “Inside Amy Schumer,” she has a steep mountain to climb in order to beat four-time reigning champ Julia Louis-Dreyfus (“Veep”). Here, the competition, while still stacked, seems more manageable considering four of the other six women already have acting Emmys of their own: Christine Baranski, Tina Fey, Melissa McCarthy and Laurie Metcalf.

Schumer’s presence as host felt so seamless that it leaves you wondering how she was never a regular cast member. In one sketch, Schumer joins an ensemble of the rest of the cast as one of many characters airing their grievances at a city council meeting. Schumer portrays a six-year-old with the voice and attitude of a conservative southern woman angry that her guns are being taken away and marriage is being opened up to gays.

CONS
While none of Schumer’s scenes are duds, voters may feel that they aren’t seeing anything new from her as the host of another sketch series — her own show did win the Variety Sketch Series award last year, after all, and is nominated again.

Though there has been an uptick in nominees in this category for hosts of “Saturday Night Live,” none have won since the back-to-back victories of Fey (2009) and Betty White (2010). Wins are much more common on the Comedy Guest Actor side than here — see our complete list.