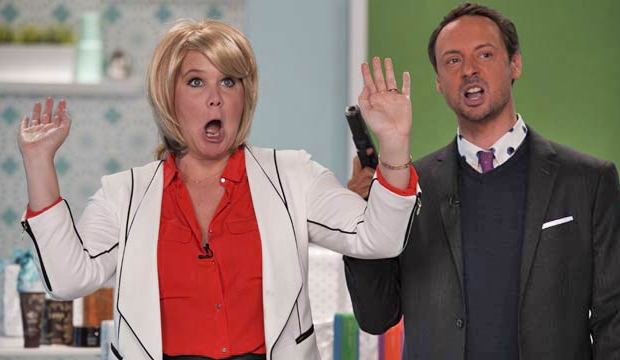 Amy Schumer is nominated for Best Comedy Actress for the second year in a row for “Inside Amy Schumer,” but she’s already an Emmy champ: she won the inaugural prize for Best Variety Sketch Series last year for the Comedy Central program. This year she picked up a remarkable six nominations overall: writing, acting and producing “Inside Amy Schumer,” writing and producing her comedy special “Live at the Apollo,” and for her guest appearance on “Saturday Night Live.” Does that overwhelming support mean she’s the frontrunner in the Best Comedy Actress category? She submitted the episode “Welcome to the Gun Show” to Emmy judges.

SYNOPSIS
Much of the episode is focused on gun violence. In the first segment, Schumer plays a home-shopping TV host explaining to her viewers how easy it is to legally buy a gun. Schumer also appears in a stand-up segment in which she speaks candidly about the deadly 2015 shooting in a Lafayette movie theater screening Schumer’s film “Trainwreck.” She closes the episode with an interview with Brina Milikowsky, a leader of the advocacy group Everytown for Gun Safety.

In other, unrelated sketches, Schumer plays a version of herself whose fear of horses ruins her chance at a role on “Game of Thrones” and a woman who tries to convince an unorthodox funeral director (Liam Neeson) to bury her loved one, but only if she can prove he didn’t die a coward. Will this episode help Schumer win an Emmy for acting to go along with last year’s Emmy for producing? Let’s consider the pros and cons:

PROS
The episode takes a stand against gun violence, the National Rifle Association and NRA-influenced politicians, and Emmy voters have frequently shown love to other comedians with a similarly liberal bent, like Jon Stewart and Stephen Colbert. Since Schumer’s activism is inspired by tragic events that hit close to home for the actress, the comedy has added weight.

Playing multiple outlandish characters gives Schumer opportunities to demonstrate plenty of acting range. And with six total nominations this year, Schumer is undoubtedly one of the year’s biggest Emmy darlings.

An affectionate “Game of Thrones” parody in a year when that HBO series is such an Emmy juggernaut couldn’t hurt.

CONS
No variety performer has won a lead or supporting race at the Emmys since sketch-show actors were moved into the comedy categories in 2009. That may be because it’s difficult to compare actors playing continuous roles to an actor like Schumer appearing in self-contained sketches as well as significant portions in which she is on stage or conducting an interview and isn’t acting at all.

Because she has six nominations voters may believe she’ll be duly rewarded in other categories and spread the wealth to someone else here.

Schumer doesn’t appear at all in one segment about sexist Twitter harassment, and she’s a minor presence in the funeral-director sketch featuring Neeson.