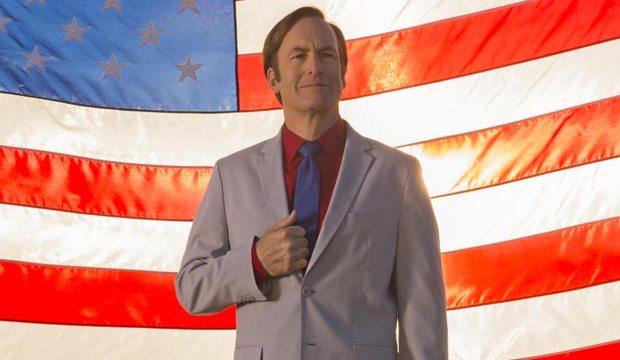 Bob Odenkirk has selected “Klick,” the season two finale of “Better Call Saul,” for Emmy voters to consider. This is his second consecutive bid for Best Drama Actor for playing Jimmy McGill/Saul Goodman on the “Breaking Bad” spinoff. Prior to “Saul” Odenkirk was an Emmy champ on the comedy side sharing in wins for Best Variety Writing: “Saturday Night Live” in 1989 and “The Ben Stiller Show” in 1993. He also received two other scripting nominations for “SNL” in 1990 and 1991 and three nominations for “Mr. Show with Bob and David”: two for writing (1998 and 1999) and one for Best Music and Lyrics (“How High the Mountain” in 1998).

SYNOPSIS
The episode opens on a flashback of Jimmy and his brother Chuck (Michael McKean) in the hospital by their ailing mother’s side. Jimmy leaves to get food and the mother wakes up. She only says Jimmy’s name twice and then dies. Jimmy returns to find out she died and when he asks Chuck if she said anything before she passed he says she didn’t. Back in the present Jimmy watches across the street from a copy shop as Chuck lies unconscious on the floor after trying to prove that Jimmy had sabotaged a case of his. When no one takes action on helping Chuck, Jimmy rushes over to the shop and has someone call 911. At the hospital Jimmy resorts to a temporary guardianship which will allow the hospital to conduct the necessary tests. Chuck confronts Jimmy about how he was at the copy shop so quickly when everything went down. As he’s putting the truth together, Chuck’s assistant Ernesto (Brandon K. Hampton) lies and says that he called Jimmy and asked him to come to the shop. In the waiting room with Kim (Rhea Seehorn) Jimmy’s commercial comes on the TV and Kim thinks it’s great. The doctors say Chuck’s physical health is good but that he is now in a self-induced catatonic state. Jimmy takes Chuck home the next day.

Jimmy goes back to Chuck’s place when he finds out something is going on with Chuck. When Jimmy gets in, he sees that the walls are all lined with foil and Chuck saying that the walls aren’t thick enough to protect him from the electricity. Jimmy asks why Chuck has sent a letter to his firm announcing his retirement. Chuck says that he can’t stand that he made a mistake with the Mesa Verde account which caused him to let the client down and subsequently blame Jimmy. Jimmy, unable to stand seeing his brother about to give up his passion, comes clean about sabotaging the account because he believed Kim deserved the account more. As Chuck is processing what Jimmy has said, Jimmy tells him that he’s calling HHM to inform him that Chuck isn’t actually quitting. Chuck asks Jimmy if he understands that he’s admitting to a felony. Jimmy says he does but that it’s Chuck’s word against his. Jimmy leaves the house to call Howard and Chuck reveals a tape recorder that was recording the conversation. He then presses “Stop.”

Will Odenkirk finally have a drama trophy to go with his two comedy ones? Let’s take a look at the pros and cons:

PROS
Odenkirk gives a wonderfully layered performance in this episode. He shows several different sides of Jimmy simultaneously. We see Jimmy as someone who has deceived his brother using his own weakness against him but also someone who cares deeply about his brother’s well-being.

There’s no obvious frontrunner like last year (Jon Hamm) or the year before (Bryan Cranston vs. Matthew McConaughey). This wide open field means that anything is possible this year and a battle between two top contenders (say Kevin Spacey vs. Rami Malek) could split enough votes to allow someone like Odenkirk to sneak in and claim the win.

We always love to talk about how speeches win Emmys and Odenkirk gets a great one at the end of the episode when he confesses to everything he’s done to Chuck and that he did it to help Kim.

CONS
With the expanded voting pools, the actual episode submission doesn’t mean as much as it used to and that could cancel out the pluses of Odenkirk’s speech and his performance.

The show received seven nominations this year which is the same amount they received last year. In addition to that, the lack of a writing nomination like they had last year could convey a sense of the show not really having any momentum ahead of the ceremony.

For some voters, Odenkirk’s performance could be overshadowed by McKean’s equally excellent performance.