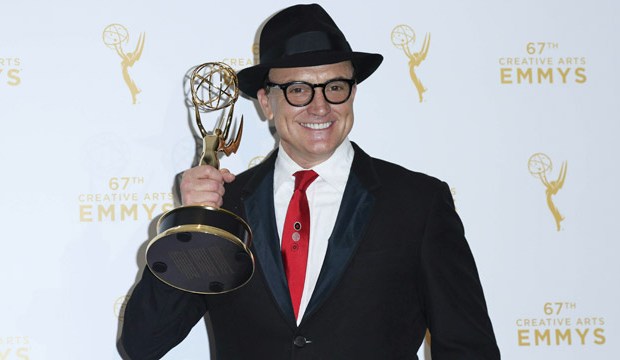 Bradley Whitford snatched the Comedy Guest Actor Emmy last year for playing Mark on “Transparent.” Mark did not make a return appearance in the second season of the hit Amazon show, however Whitford reappeared as a new character, Magnus Hisrschfeld. Magnus’ brief appearance during a set of Germany flashbacks has scored the two-time Emmy winner a return trip to the Guest Actor category (he also won Drama Supporting Actor for “The West Wing” in 2001). Whitford has submitted the eighth episode of “Transparent’s” second season, “Oscillate,” for Emmy consideration. Will the episode be enough for the reigning champ to claim back-to-back wins?

SYNOPSIS
The episode begins in Berlin of 1933, in one of the many flashbacks of “Transparent’s” second season. Rose (Emily Robinson) accompanies her trans sister Gittel (Hari Nef) to The Institute. It is a carefree place where the patrons can indulge in drink, flesh and their queerness, away from the oppressiveness outside the walls. When the girls’ mother Yetta (Michaela Watkins) arrives to give her children visas to the U.S., Gittel refuses to leave the sanctuary she has found. Yetta confronts Magnus, the leader of The Institute, whom she believes has warped her children’s views.

Magnus tries to explain his position as a man of science and knowledge and that his path is the way of the future. The two argue over Gittel, Yetta still refusing to use her chosen female name and pronouns while Magnus embraces her identity. Yetta realizes she has been defeated, and hands Magnus Gittel’s visa (which has the male name Gershon) for safe keeping before leaving Institute to pack her bags. Below, let’s examine the pros and cons for whether Whitford will win another Emmy for this series:

PROS
Whitford uses an accent, heavy hairstyling, and a mustache to become this new character. Actor transformations are often catnip to this awards body.

Jay Thomas won this category two years in a row for “Murphy Brown,” while Mel Brooks claimed three consecutive Guest Actor trophies for “Mad About You.” Justin Timberlake (“SNL”) had just one year separating his two wins in this category. Whitford could become the next Emmy winner the voting body name-checks.

Is there still residual “West Wing” love within the TV academy? After all, his former co-star Allison Janney keeps getting nominated and/or winning for “Mom” and “Masters of Sex.” This may have helped Whitford earn another nom for “Transparent” and could very well push him over the edge to win.

CONS
Whitford only gets about one minute and thirty seconds of screen time, which is less than any of his competitors in the Best Comedy Guest Actor race.

The scene is devoid of any comedy, and while finely acted, the scant amount of lines hardly allows Whitford to showcase his range. He doesn’t get a chance to make much of an impact.

His only scene is near the beginning of the episode and by the end of “Oscillate” voters may forget they’re watching Whitford’s episode submission.