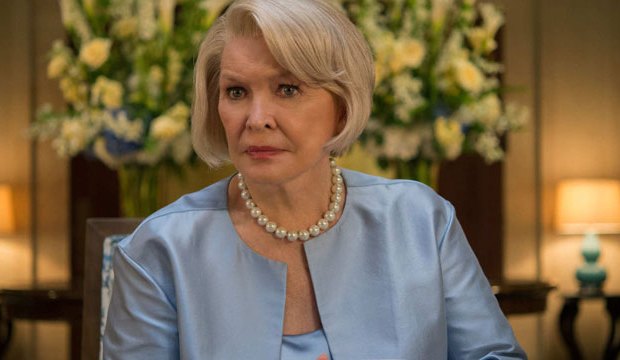 Is Ellen Burstyn poised to add a third Emmy to her shelf for her guest turn in “House of Cards?” She already has two trophies (Drama Guest Actress for “Law and Order: SVU” [2009] and Movie/Mini Supporting Actress for “Political Animals” [2013]) to go with her Best Actress Oscar for “Alice Doesn’t Live Here Anymore” (1974) and her Best Actress in a Play Tony for “Same Time Next Year” (1975) (c’mon, Ellen, drop an album already to complete that EGOT).

Burstyn is nominated for playing Elizabeth Hale, the cancer-ridden mother of First Lady Claire Underwood (Robin Wright), and submitted “Chapter 41” for voters. Let’s take a look at her chances of winning for this Netflix drama:

SYNOPSIS
After splitting from Frank (Kevin Spacey), Claire retreats to Texas, where she learns that her estranged mother is dying of cancer. To jumpstart her own political career, Claire wants to run for Congress in the one district with an open spot that election cycle, and Elizabeth agrees to use her immense wealth to help her. This includes convincing her snooty pals to start backing Frank’s chief opponent, Heather Dunbar (Elizabeth Marvel), in the upcoming Democratic primary. Elizabeth has always despised her son-in-law, and takes no small pleasure in plotting his downfall.

Frank kills Claire’s campaign with an endorsement for her rival during the State of the Union address, but that doesn’t stop her from retaining the services of a savvy political consultant (Neve Campbell). This comes at a price, however, and she confronts her mother for more money, threatening to sell her vast estate right out from under her.

Can Burstyn win for this episode? Let’s take a look at the pros and cons:

PROS
The word “legend” doesn’t even begin to describe this veteran of the stage and screen of almost 60 years. She’s an Emmy darling as well: remember her infamous nomination for a 14-second cameo in the TV movie “Mrs. Harris” (2006)? Needless to say, she has a lot more to do this go-round, including a moment of rage where she rips off her cap to reveal her chemo-induced bald head. It’s the kind of raw, naked moment for which the words “award worthy” were created.

“House of Cards” has proven to be extremely popular with actors this year, with eight total nominations in five different categories. With Spacey and Wright expected to take home their first trophies, and Reg E. Cathey poised to repeat in Drama Guest Actor, perhaps Burstyn could get carried along in a sweep.

Burstyn’s guest turn in the CBS sitcom “Mom,” where she plays another estranged parent, helps show off her range. It helps that her episode, “Terrorists and Gingerbread,” was submitted by Allison Janney for her own nomination.

CONS
Burstyn is nominated alongside “House of Cards” regular Molly Parker. Could vote-splitting swing the win to three-time Emmy nominee Laurie Metcalf (“Horace and Pete”)? As with Burstyn, the other three contenders — Janney (“Masters of Sex,” 2014), Carrie Preston (“The Good Wife,” 2013) and Margo Martindale (“The Americans,” 2015) — have all won this race before.

(SPOILER): Did Burstyn submit the right episode? Although this one gives her a lot to work with, would her last episode, with a politically-motivated assisted suicide, have been an even better choice?