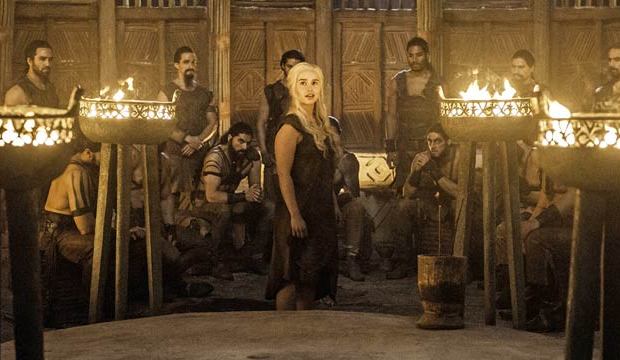 After two previous nominations for playing Daenerys Targaryen on HBO’s “Game of Thrones,” Emilia Clarke comes roaring back to the Emmy Awards. The Mother of Dragons has yet to claim victory, but she has wisely submitted the fiery Season 6 episode “Book of the Stranger” for consideration. This stacked category pits Clarke against two of her co-stars (Lena Headey and Maisie Williams), two buzz-about performances from little-rewarded shows (Maura Tierney in “The Affair” and Constance Zimmer in “UnReal”) and one real-life dame (Maggie Smith in “Downton Abbey”).

SYNOPSIS
Daenerys is being admonished by the widows of fallen Dothraki leaders after her capture by Khal Moro and his riders. She grows tired of listening to the crones, and asks to relieve herself. A young widow accompanies her on the walk and the girl reveals the brutal details of how she was first taken by the Khalasar. Jorah and Daario, having infiltrated Vaes Dothrak, ambush the girls in an effort to rescue Daenerys. She commands them to give up their attempt as she has her own plan in the making.

Daenerys is brought into a temple by the young woman to meet with the Khals. The men argue over what to do with her, but Daenerys dismisses the group as petty and weak. Khal Moro laughs and describes how his men and horses will rape Daenerys. Unfazed by the threats, she places a hand on a scolding brazier and topples it over. The flames spread quickly, igniting the temple and burning all the men alive. Daenerys emerges from the inferno, naked and unburnt, so everyone bows to her as their new ruler. Can “Book of the Stranger” help Clarke finally dominate the Emmys? Let’s examine the pros and cons:

PROS
Clarke displays great range in this riveting performance. Daenerys shares a rare intimate and quiet moment with a young woman. She then ends the episode commanding her full power as she confronts the men and torches the temple.

The imagery of Daenerys emerging from the flames is one of the most iconic moments of this past season and, arguably, of the entire series.

Many performers have taken home Emmys for shedding their clothes. While Clarke has done several nude scenes, this time she gets naked not for sexual objectification, but as an icon of female empowerment

CONS
The sheer size of the cast on “Game of Thrones” means that individual actors rarely dominate an episode. While Clarke’s two scenes are well-placed (one toward the beginning, one at the end), she spends much of the episode off-screen.

The other memorable material in the episode belongs to another nominee — Headey — who gets to play her two greatest strengths in her scenes: manipulative political strategist and protective mother lion.

Clarke speaks in the fictional Dothraki language for almost the entire episode. Will voters embrace a performance in a made-up language?