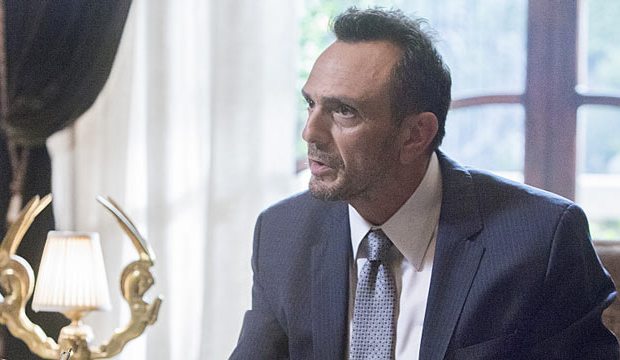 Hank Azaria first guested on Season 2 of “Ray Donovan” as Ed Cochran, FBI Director of the LA Office. However, because of a new Emmy rule that year (2015) Azaria was deemed ineligible for a guest nomination because he appeared in too many episodes. He returned this season seeking revenge on the title character, played by Liev Shreiber, and was nominated for Best Drama Guest Actor. He submitted the episode “One Night in Yerevan.”

SYNOPSIS
While working at a security firm, Ed Cochran is performing background checks on the owners of the NFL team that Paige Finney (Katie Holmes) hopes to buy. This gives him the chance to seek out revenge on Ray Donovan (Schreiber) for destroying his life in the second season. As he seeks vengeance he discovers that Andrew Finney (Ian McShane) had murdered his son-in-law and Ray had assisted him in covering it up.

Will Azaria’s performance be enough to put him in the winner’s circle? Let’s consider the pros and cons:

PROS
Azaria appears throughout his episode giving a menacing performance as the disgraced former Los Angeles FBI Director out for revenge. This gives him plenty of time to impress voters with his performance as he taunts McShane and Schreiber.

CONS
Azaria might appear throughout the episode but many of these scenes are of him doing research at his desk and putting the pieces together. Voters might get bored and tune out before they get the chance to see him shine.

Why is Azaria’s character out for revenge? That’s a question voters might be asking themselves if they should fast forward through the “previously on” or aren’t familiar with his character from Season 2.

Rival nominees are: Michael J. Fox (“The Good Wife”), Max von Sydow (“Game of Thrones”) and “House of Cards” players Mahershala Ali, Reg E. Cathey and Paul Sparks. Azaria and Fox are the only contenders whose shows are not up for Best Drama Series. This could put them at a disadvantage.