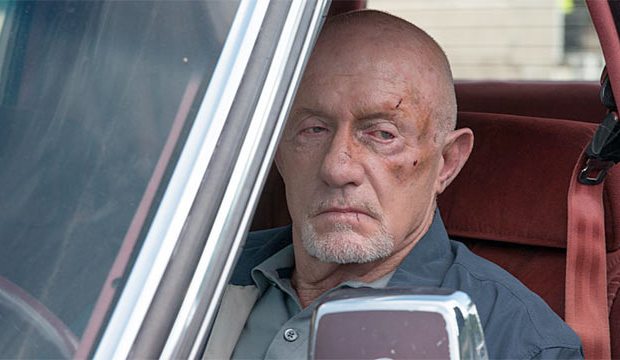 After being upset in the race for Best Drama Supporting Actor last year by Peter Dinklage (“Game of Thrones”), Jonathan Banks returns to the Emmy Awards for “Better Call Saul.” Banks earned his fourth career nomination for playing the character of former cop turned hired gun Mike Ehrmantraut. In addition to last year’s nom, he’s in the Emmy record books for being nominated in this category for three different series: as Mike on “Breaking Bad” in 2013 and as Frank McPike on “Wiseguy” in 1989. Banks has chosen “Bali Ha’i” as his Emmy episode submission this year.

SYNOPSIS
After a plot to get drug dealer Tuco Salamanca (Raymond Cruz) thrown in jail, Mike was offered $5,000 by Tuco’s uncle Hector (Mark Margolis) to exonerate Tuco in the previous episode. In “Bali Ha’i,” Mike arrives at his home to find one of Hector’s henchman waiting for him outside demanding an answer, but Mike respectfully declines the offer. Later, Mike catches and ambushes more henchmen in his house. The men say that they were there to scare Make, and Mike tells them to try harder.

The next day Mike watches his granddaughter Kaylee play in the pool when he looks up and sees a pair of Salamanca hitmen on a nearby rooftop. They make threatening gestures towards Kaylee, which greatly disturbs Mike, so when he sees Hector in person later on he demands $50,000 to free Tuco. When Hector threatens Mike’s family, Mike threatens him right back, so Hector eventually agrees. Nacho goes to Mike’s house to deliver the payment and Mike gives him half because Mike ultimately couldn’t fulfill his end of their agreement to get Tuco out of the way. Can Banks finally make it to the winner’s circle with this episode? Let’s take a look at the pros and cons:

PROS
Banks gets some great range to display in this episode. We see Mike as a careful, measured and meticulous person when handling Hector’s henchmen, but also a worried and protective man when confronted with threats against his family.

“Better Call Saul” scored the same number of nominations this year as it got last year (seven), which shows that the buzz has not diminished as viewers eagerly await the third season next year.

Some voters might think of Banks’s performance as too one-note and see Mike only as a curmudgeon rather than a layered character.