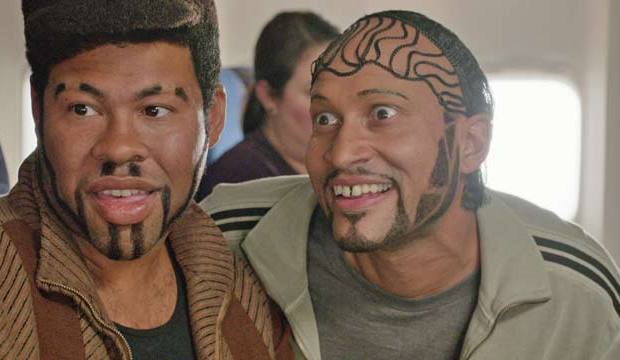 Keegan-Michael Key is nominated for Best Comedy Supporting Actor at the Emmys for the second time for “Key and Peele.” The series ended its five-season run last summer, but as a going-away present the TV academy has given him four nominations this year, including bids for writing and producing the Comedy Central sketch series. That brings his total to 10 nominations in just three years. Will he win for the first time? He submitted the episode “Y’all Ready for This” to Emmy judges.

SYNOPSIS
Key appears in numerous segments: as a football player whose pre-game pep talk turns into a deadly action-movie standoff, an unexpectedly feminist pirate, a racist white police officer firing wildly at innocent black men, and a strange airline passenger who promises to take down any dangerous “terries” should they act “froggy” by trying to hijack the plane.

Will this episode stand out in a crowded category with six other nominees? Let’s consider the pros and cons.

PROS
Key is in every single scene, so he’s at an advantage against rival nominees on ensemble shows like Tony Hale and Matt Walsh (“Veep”), Andre Braugher (“Brooklyn Nine-Nine”) and Ty Burrell (“Modern Family”), who have to share screen time with their many co-stars.

You couldn’t ask for more range and impact, which are keys – pun intended – to winning Emmys. His performances in this episode vary wildly, and they’re all showy, scene-stealing comic turns, especially Luther the anger translator and the borderline-unintelligible airplane vigilante.

This is the last chance to honor Key’s work as an actor on this show, and his four bids – they even nominated him for his voice-acting turn in the animated series “SuperMansion” – indicate that voters might admire him enough to want to reward him now.

CONS
Variety performers haven’t won a lead or supporting race at the Emmys since sketch-show actors were moved into the comedy categories in 2009. Perhaps voters prefer continuous characters to self-contained sketches.

The Obama/Clinton sketch aired a year ago, before Donald Trump became the dominant subject of political comedy, so those jokes may not resonate as strongly with voters watching it today.

“Key and Peele” has been off the air for 11 months. Could it be out of sight and out of mind for Emmy judges?

Keegan-Michael Key and 'Schmigadoon!' cast on 'privilege' of performing showtunes during the…

'Hillary' producer Howard T. Owens on the story of Hillary Clinton 'that you didn't know' [EXCLUSIVE…