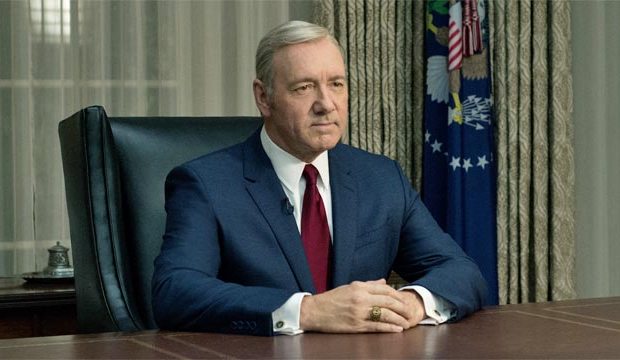 After 10 nominations — four for Best Drama Actor on “House of Cards,” four for Best Drama Series as a producer, Best Miniseries/Movie Actor for “Recount” and Best TV Movie for “Bernard and Doris” — Kevin Spacey could finally win his first Emmy Award this year. Currently, Spacey is second in our odds chart to take home Best Drama Actor for his performance as the cunning, “ruthlessly pragmatic” (the character’s own words) politician Frank Underwood, who will do anything for power on “House of Cards.” However, he will need to overcome favorite Rami Malek (“Mr. Robot”) to break his Emmy curse. The actor has chosen the season finale (titled “Chapter 52”) as his episode submission to Emmy voters.

SYNOPSIS
Frank plays hardball with the Millers’ captors and secures the release of the daughter and the mother, leaving Claire’s (Robin Wright) attempt to convince Ahmadi to cooperate as the key step in getting the father released. While Claire continues negotiations with Ahmadi in the hopes of getting James, released, Frank dismantles Conway by revealing the news headlines. Meanwhile, Frank meets Tom Hammersmith at the White House and attempts to quash him and his dating news story.

Hammersmith states he doesn’t believe Frank murdered Zoe Barnes but does believe he is corrupt. The story remains on track to be published. Ahmadi double crosses Claire by agreeing to her terms and then, during a video call, orders his men (the terrorists) to execute James Miller. Frank and Claire come up with a plan to attack the public’s hearts, after which Frank delivers a fear-mongering speech to the nation, declaring they are at war. James Miller is then executed in a live broadcast. Frank and Claire turn to us and state, “We don’t submit to terror. We make the terror.”

PROS
Spacey has yet to win an Emmy but has two Oscars — “The Usual Suspects” (supporting, 1995) and “American Beauty” (lead, 1999) — a SAG Award, a Golden Globe, a BAFTA, a Tony and an Olivier award. It seems inevitable that Spacey will, at some point, add an Emmy to this collection. So why not now, for such an iconic show?

Frank Underwood is a popular character and has been a bit of a career-booster for Spacey who has been thrown back into the awards fray after quite some time away from it. “House of Cards” is the right kind of show to win Emmys, it’s just whether now is the right time. The show, having just completed its fourth season, can’t go on forever so Emmy voters could take this opportunity, of which there can’t be many left.

“House of Cards” introduced Netflix as a creator of original, critically acclaimed entertainment. This season has seen an increase in praise by critics, earning the show its best approval rating yet: 87% at Rotten Tomatoes.

CONS
It will take a lot for Spacey to unseat Malek. “Mr. Robot” is the “it” show at the moment and could even overtake “Game of Thrones” to win Best Drama Series. Spacey could be forgotten in the wake of this exciting young actor. Reviews for Malek have been consistently excellent, while Spacey has had his critics for his role.

Malek has been nominated for every notable TV award for this show (SAG, Emmy, Golden Globe, TCA) but has only won a Critics’ Choice Award. At least Spacey has won two SAGs and a Golden Globe for his show; Malek remains empty-handed and voters might like to even the scales here.

Furthermore, Spacey is in danger of seeing all the plaudits stolen from him by co-star Wright. Wright has seen her role deepened and has almost usurped Spacey as the show’s MVP. Voters may listen and reward “House of Cards” with a Best Drama Actress Emmy for Wright and choose to reward a different show for Best Drama Actor — and that could be Malek or even Bob Odenkirk (“Better Call Saul”), who sits third in our odds chart and is breathing down Spacey’s neck with a lot of fans and rave reviews. Spacey is sandwiched between two great performances and may not be able to emerge victorious.