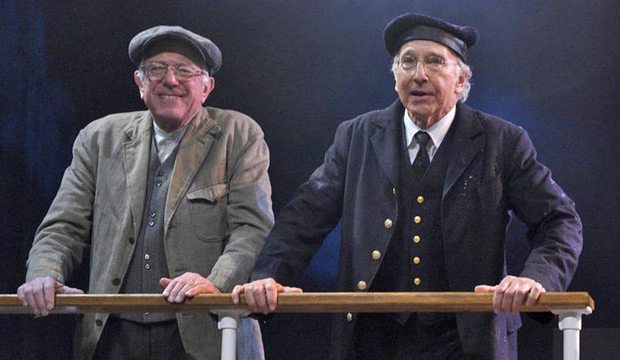 Former “Saturday Night Live” writer Larry David returned to the show for the first time as host, earning a Best Comedy Guest Actor Emmy nomination in the process. Riding the wave of the 2016 election cycle, David cameoed several times as Democratic presidential candidate Bernie Sanders this season, then finally took over as host on February 6 with musical guest The 1975. David is a two-time Emmy champ for writing and producing “Seinfeld” (1993), however he’s never won an acting prize despite five lead actor nominations for “Curb Your Enthusiasm” (2003-04, 2006, 2010, 2012).

SYNOPSIS
“You’re gonna be very disappointed. That’s what I do, I disappoint people,” jokes David at the top of the monologue. He goes on to admit that the hosting thing is “so stupid” and that he doesn’t even host people at his house. David then pops up in a sketch about training young officers how to shoot as a talking target named Kevin Roberts who’s stuck in the 80s. Next, he portrays Sanders in a spoof of “Curb Your Enthusiasm” in which the presidential hopeful gets in hot water by refusing to shake a black woman’s hand because she coughed into it.

In a Titanic-esque sketch, a ship is going down when David’s character takes issue with the fact that women and children are supposed to get to safety first. When he says that he’s rich and should be allowed to go into a life boat, the real Sanders appears and says he’s “so sick of the 1%,” as the audience applauds wildly. Among the other sketches, David appears in a fake commercial for “The X-Files,” plays a songwriter obsessed with frogs and portrays a bar patron who makes out with Kate McKinnon. Will first time be the charm for David as “SNL” host? Let’s examine the pros and cons:

PROS
David is an industry favorite who’s now up to 25 career nominations for acting, writing and producing. If Emmy voters are aware that he’s never won an acting award, they may feel obliged to give him the victory.

Don’t forget, this is a comedy category and David brings the laughs by feeling the Bern. David also taps into the country’s obsession with the 2016 Presidential election by perfectly taking on Sanders.

In the past seven years, “SNL” hosts have won this category a whopping four times: Justin Timberlake in 2009 and 2011, and Jimmy Fallon in 2012 and 2014. If the pattern continues, David could easily prevail, however …

Does David even want to win? His blase demeanor and jokes about disappointing the audience may not go over well for TV academy members who aren’t in on the joke.