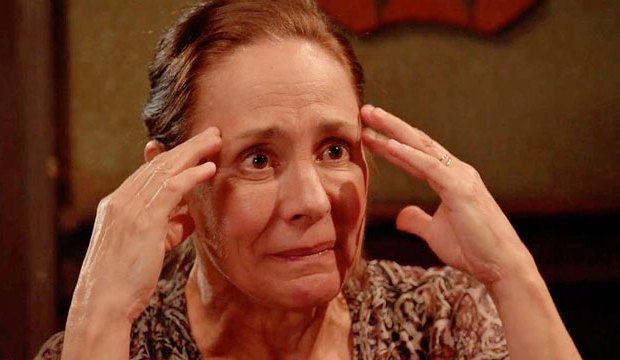 Laurie Metcalf has submitted “Episode 3” of “Horace and Pete” for Emmy Awards voters to consider in the Best Drama Guest Actress race for her performance as Sarah. This three-time champ for “Roseanne” (1992-1994) reminded everyone this year that she is practically Emmy royalty by scoring three individual nominations as a performer. In addition to this bid she was also nominated for  both Comedy Actress (“Getting On”) and Comedy Guest Actress (“The Big Bang Theory”).

SYNOPSIS
The episode opens on Sarah talking to someone off-camera about when she got married to Glen and his parents gave them a summer house in Pennsylvania as a gift. She then starts talking about her father-in-law, Roger, and how he would always come by the house to fix things and how she started to take notice of the muscles of this 84-year-old man. Sarah then recalls when she was sunbathing and heard his truck coming down the road. She closed her eyes and spread her legs open and let Roger look at her, all the while feeling both dirty and excited. The camera cuts to Horace (Louis C.K.) and we come to realize that Sarah is his ex-wife who divorced him after he cheated on her with her younger sister.

Sarah then reminisces about how a couple days after the sunbathing incident, Roger was painting the downstairs and she started to touch herself. Sarah admits that she is now sleeping with Roger and is telling Horace this to find out how he dealt with how their marriage came apart. Horace says that she can either stop completely or continue down this self-destructive path. When Horace says how awful he feels about everything, Sarah tells him to forgive himself and that she’s happy for him and she leaves.

Can Laurie Metcalf return to the Emmy stage 22 years after her last win? Let’s examine the pros and cons:

PROS
Metcalf is an Emmy darling. This is her 10th career nomination. Besides those three wins, she was nominated once more for “Roseanne” in 1995 and then scored three bids for Comedy Guest Actress: “3rd Rock from the Sun” in 1999, “Monk” in 2006 and “Desperate Housewives” in 2007.

This is the kind of performance that actors will really love. Those who are only familiar with Metcalf as a comedic actress will be blown away by her gravitas as she runs through a gambit of emotions throughout the episode’s 43-minutes.

While Louis C.K. has never won an Emmy for a performance, his shows have proven they can win in the guest categories with Melissa Leo taking home the Comedy Guest Actress prize in 2013 for “Louie.”

CONS
The Emmys may love Metcalf but they were definitely not a fan of this show as it only reaped one other nomination: Best Multi-Camera Picture Editing. Contrast that to C.K.’s other program, “Louie,” which earned 22 nominations during its run from 2011-2015 along with three wins.

The material could present a problem for some voters. Some might feel that what Metcalf’s character is talking about is too bizarre and disturbing for them and they might just ignore it completely.

With three other nominees in this category hailing from Best Drama Series contenders (Ellen Burstyn and Molly Parker for “House of Cards” and Margo Martindale for “The Americans”) and the three most recent champs back in contention (Martindale in 2015, Allison Janney for “Masters of Sex” in 2014 and Carrie Preston for “The Good Wife” in 2013), Metcalf might just have been lucky to be invited to the party in the first place.