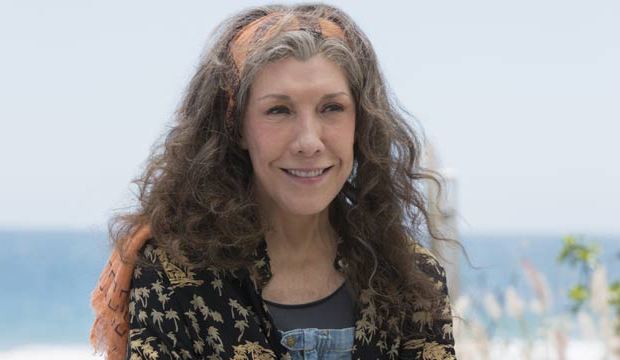 Legendary actress, writer, and comedian Lily Tomlin earned her 23rd Primetime Emmy nomination this year for her role as a free-spirited divorcee in the Netflix comedy “Grace and Frankie.” Although she has six statues on her mantel already for writing, producing, and narration, a win in this category would be Tomlin’s first for acting. To that end she has submitted the episode entitled “The Test” to Emmy voters.

SYNOPSIS
Fed up with having to drive her everywhere, Grace (Jane Fonda) forces Frankie (Tomlin) to renew her driver’s license. But Frankie is having trouble passing her test, failing so many times that her sons (Ethan Embry and Baron Vaughn) believe she may not be mentally fit to drive. Finally Frankie realizes her problem: she is always stoned when she studies. So she decides that in order to pass the test she needs to recreate her study environment, by being high during the test.

Will Tomlin’s performance lead to her first acting win? Let’s look at the pros and cons of her submission:

PROS
Tomlin’s submission is tailor made to win Emmys. She shows great range in her character’s anger at her sons’ questioning her mental fitness, followed by fear and sadness that they may be right. She’s hilariously high on drugs as she giggles her way through her driver’s test. And all throughout, she has a series of biting one-liners as she tries to entertain Grace’s country club friends.

Tomlin is beloved in the industry, as demonstrated by the announcement that she would receive the Lifetime Achievement Award from the Screen Actors Guild. This announcement coming just before Emmy voting can only help Tomlin.

If voters are aware that Tomlin has never won an Emmy for her acting, they may feel that the beloved veteran is overdue despite her previous wins.

CONS
In the two seasons that “Grace and Frankie” has been on the air, Tomlin has been the show’s only nomination, which is evidence of a lack of broader support for the show in the TV academy.

Since Emmy voting has changed in recent years, there’s no guarantee that Emmy voters are watching the submissions. Without significant buzz for the show as a whole, how many voters will even see Tomlin’s performance?

Julia Louis-Dreyfus has dominated this category for the past four years, and with “Veep” receiving unprecedented support from all branches of the academy, the buzz does not favor Tomlin.