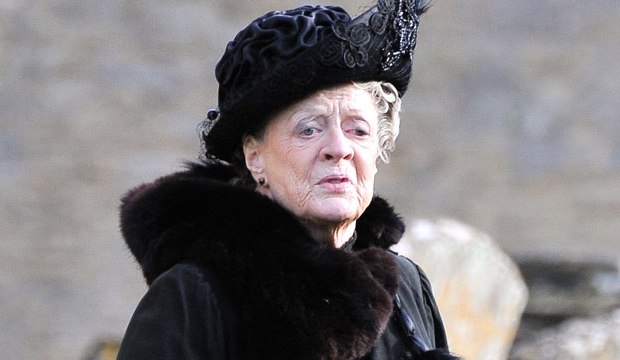 Dame Maggie Smith has selected the sixth episode of the final “Downton Abbey” season (titled “Episode 6.06”) as her episode submission for Emmy Awards voters to consider. Smith already has two Emmys for playing Lady Violet Crawley, sharp-tongued Dowager Countess of Grantham plus one more for “My House in Umbria” (Best Movie/Mini Actress). Chuck in two Oscars, three Golden Globes, five SAG Awards and six BAFTAS and you’ve got yourself one of the most awards-decorated actresses of our time. And Smith could be about to add to that collection on her final bid for “Downton Abbey.” However, as she is currently second in our odds chart , she’ll have to overcome the might of Lena Headey (“Game of Thrones”) in order to do that.

SYNOPSIS
The Board of the Downton Cottage Hospital decides to approve its merger with the Royal Yorkshire Hospital and replaces Lady Violet as president by electing Cora as the new leader. Mary and Tom then raise funds for the hospital by opening the house to the public for a day. Bertie persuades Cora, Mary and Edith to act as guides for the public, but they are actually embarrassingly ignorant and unknowledgeable about the history and contents of the house.

Lady Violet, having learned about her being replaced as president, arrives with quite a temper and dismisses the “common people” from the house. She then berates Cora and Robert for their “treachery,” while Carson questions Thomas about his meetings with Andy, which causes him even more distress and reduces him to tears. Will Smith’s final performance as Lady Violet win her another Emmy? Let’s consider the pros and cons:

PROS
Smith is a beloved, seasoned veteran. She is one of Britain’s most revered actresses and American audiences and awards group have embraced her just as warmly. What goes in her favor, above anything else, is the fact that it’s a great performance. Smith has made this character her own and audiences everywhere love it. She is the most famous, renowned (perhaps best) actress of the six nominees and if voters feel like getting all “actorly” while casting their ballot, then Smith could be their choice.

Her episode submission is fantastic, with definite scenery chewing, scene stealing moments that has become such a staple, beloved part of the Lady Violet character. It’s a performance everyone can enjoy, even if they don’t very much enjoy the show – that’s crucial. Smith’s performance is a very likeable, enjoyable one no matter what. That could persuade those umming and ahhing voters who like to sit on the fence to vote for her.

This is also Smith’s swan song as Lady Violet. It’s the last chance for Emmy voters to reward a character as entertaining as Lady Violet and an actress as worthy as Smith. They might just want to grab that last opportunity, while all of the other nominees (Maura Tierney for “The Affair,” Constance Zimmer for “UnREAL” and Maisie Williams, Emilia Clarke and Headey for “Game of Thrones”) will have one, two or more chances to win for their respective show’s upcoming seasons. It’s not last chance saloon for anyone but Smith and Emmy voters might just get sentimental.

CONS
As previously stated, Smith is a seasoned, award-laden actress. She has won at least one of every notable award there is. If she lost here, she wouldn’t miss out one iota. The others, however, would. The other five nominees don’t have a single Emmy win between them. Tierney has two nominations, Zimmer and Williams one each and Clarke and Headey have three apiece. Voters may want to spread their love here. They’ve already shown Smith plenty of their admiration, while actresses such as Clarke and Headey have been shown none so far.

And with Headey giving such a fine performance (as usual) in season six of “Game of Thrones,” as well as zero out of three record, it is no surprise she sits top of our odds chart. Smith has a lot going for her, granted, but Headey has been a crucial part of her show from the very beginning and it seems right to reward her for her excellent contribution. They are only two seasons left now for “Game of Thrones” so although there may be another chance for Headey should she not win this year, voters are running out of chances. I have a feeling voters might like to reward Headey now and then reward someone new next year (maybe Clarke). A win for Smith here might be, in their eyes, a bit of a wasted win for someone who already has two, and a missed opportunity to reward others with none.