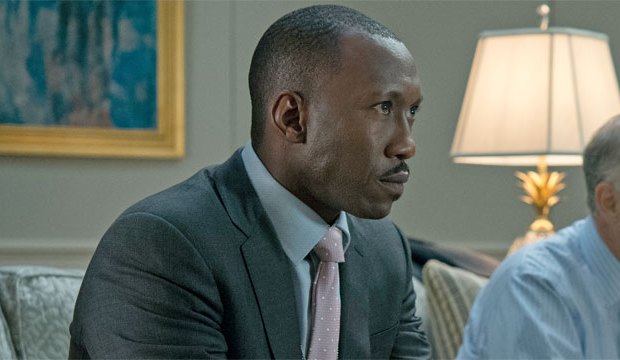 Mahershala Ali received his first career Emmy nomination this year for “House of Cards.” He portrays Remy Danton on the Netflix drama, who was President Underwood’s (Kevin Spacey) chief of staff in the White House until he decided to leave politics. Prior to that position, he had been Underwood’s press secretary in the House and had worked as a lobbyist for a natural gas company. Ali has chosen “Chapter 44,” the fifth episode of the program’s fourth season, as his submission to the Emmy voters.

SYNOPSIS
In the aftermath of the assassination attempt on President Underwood, we see Remy in Florida waiting in line for gas. When the station he’s at runs out of gas for the day he gets a text from Jackie Sharp (Molly Parker), who he had been having an affair with, joking about the craziness going on in DC. He almost texts back that he misses her but decides against it. Later, while at his parent’s house, Remy is visited by Leann Harvey (Neve Campbell), the campaign manager for the Underwoods. She tells him to come back to Washington to help Claire Underwood (Robin Wright) and at first he refuses, but after she shows him pictures of him and Sharp coming out of a hotel together (which could destroy her career) he reluctantly agrees.

In Washington, Claire asks Remy to help in getting a deal together between the Russians and the Chinese to end the gas crisis. Remy is then seen with Raymond Tusk (Gerald McRaney) trying to convince him to exert his influence with the Chinese. He manages to bring Tusk to his side and the two go to the White House for a meeting with both Claire and the acting president Donald Blythe (Reed Birney) where they discuss how to use China to lower oil prices. At the end of the episode we see Remy enter an elevator on Capitol Hill with Jackie and the two stand close to each other as the elevator doors close.

Could Ali score a win with his first Emmy nomination? Let’s consider the pros and cons:

PROS
One can’t help but feel sympathy for Remy. He wanted to get out of politics because of how the administration is treating Jackie and ends up returning when they threaten to expose her and ruin her career as a public official. Sympathy toward characters has helped several people win Emmys in the past and this could continue the tradition.

“House of Cards” finally proved that it could break through in the acting races last year with Reg E. Cathey‘s win in this category. With that barrier having been broken, it’s not that hard to see Ali potentially winning.

If the voting panel is made up of fans of the show, he is a welcome presence as Ali has been on the show since the first season. That sort of thing only helps him.

CONS
Ali’s character doesn’t really do that much in this episode. Even with his limited amount of screen time, there’s no real standout scene that will wow voters.

Among his competitors in this category are faces that are much more familiar to Emmy voters including two multiple winners (Hank Azaria and Michael J. Fox) and a two-time Oscar nominee (Max von Sydow). This does not work in Ali’s favor.

He’s also going up against two of his co-stars (Cathey and Paul Sparks) and Cathey is last year’s champion in this category. He could very easily be overshadowed in this aspect as well.