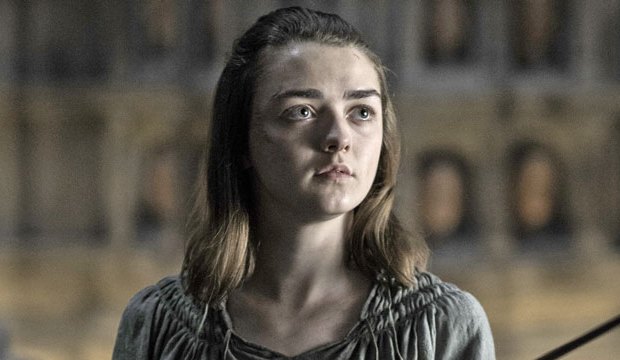 Maisie Williams scored her first Emmy nomination this year for playing Arya Stark on season six of “Game of Thrones.” At just 19, she is one of youngest-ever Drama Supporting Actress nominees. She is hoping to become the first actress to win for “Game of Thrones” with her Emmy episode submission “No One.”

SYNOPSIS
Arya spent most of  the season blind and in training to serve the Faceless Men in the House of Black and White. Her mentor Jaqen H’ghar (Tom Wlaschiha) orders Waif (Faye Marsay), whom Arya has sparred with for most of the season, to kill her. Waif stabs her in the stomach before Arya escapes. “No One” begins with Lady Crane (Essie Davis) discovering a dying Arya and patching her up. Later, Arya awakens to find that the Waif has just killed Lady Crane.

Thus begins a chase through the streets of Braavos as Arya lures Waif to a dark room. With Needle, her trusty sword, and the knowledge that the only way she can defeat Waif is in the dark, she slices the candle in half. Jaqen discovers Waif’s bloody face among the hall of faces as Arya confronts him for ordering her death. He declares her ready, but this time she declares she is “Arya Stark” and is going home.

Will Williams become the first person born in the 1990s to win an Emmy? Let’s examine the pros and cons standing in her way.

Voters will get two opportunities to see Williams, as she also appears in Headey’s episode “Winds of Winter.”

She has great impact in her final scene, tears filling her eyes as she confronts her mentor. It’s a sympathetic performance and you root for Arya Stark. It is the kind of episode that voters like to reward.

CONS
Also in this race are Clarke and Headey, both on their third Emmy nominations. In a popular vote this trio could split the vote.

The Emmys are reluctant to reward younger performers. Williams shocked many when she scored this bid, not because she’s undeserving, but because she’s only 19.

In Headey’s episode, Williams exacts revenge by killing all of Lord Walder Frey’s sons and serves him a pie containing their bodies, before cutting his throat. Voters may be turned off by a teenage serial killer.