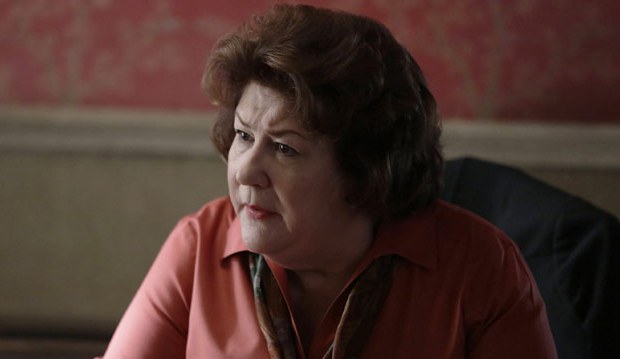 It took the Emmys four seasons to finally nominate “The Americans” for Best Drama, but the one actor from the series who has always been on the TV academy’s radar is Margo Martindale. This year Martindale received her fourth consecutive bid for Best Drama Guest Actress for her role as Claudia, the former KGB handler for undercover spies Philip and Elizabeth Jennings (lead-acting nominees Matthew Rhys and Keri Russell) in FX’s period drama.

Martindale, who won this category last year and also won an Emmy in 2011 for her supporting role in “Justified,” has received her latest nomination for her performance in the episode “The Magic of David Copperfield V: The Statue of Liberty Disappears.”

Synopsis: Gabriel (Frank Langella), the current handler of Philip and Elizabeth, confides in Claudia that he fears he is losing his influence over his agents. Claudia urges Gabriel not to blame himself, as there are no easy answers in their business.

So does Martindale have the material to defend her Emmy crown? Let’s take a closer look at her submission:

PROS
Though only appearing in one brief scene, Martindale conveys both strength and authority as she tells Langella to essentially stop whining about his lack of control. She also shows some range by conveying Claudia’s weariness with the state of the world.

Emmy winners in acting categories often repeat, which is especially relevant because Martindale’s win in this category last year came for a similar submission and performance: a single appearance in a quiet, conversational scene across a table from Langella.

Emmy voters love Martindale, as evidenced by her repeated nominations for this role. With “The Americans” receiving so much more adoration this year, Martindale could benefit from the show’s greatly increased support.

CONS
Martindale’s single scene in this episode is about a minute and a half in length, and her dialogue consists of a mere 65 words. Every other nominee in this category has far more screen time and material, so Emmy voters might look to reward a more substantial performance.

The performance is very calm, lacking the kind of depth and emotional fireworks that tend to win acting awards.

Langella’s performance in the scene overshadows Martindale. She spends the majority of the scene listening to Langella, who has the more emotional role, so voters looking for impact won’t find it in Martindale’s brief, quiet performance.