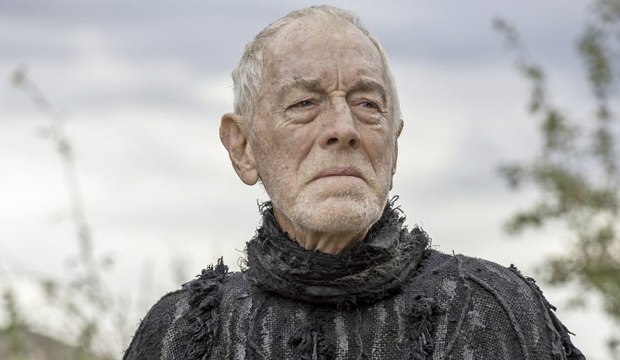 Max von Sydow reaped the first-ever Drama Guest Actor nomination for “Game of Thrones” in its sixth season. This one-time Movie/Mini Supporting Actor nominee (“Red King, White Knight”; 1990) is a strong contender to win this year with his episode submission “The Door.”

SYNOPSIS
Bran Stark’s (Isaac Hempstead-Wright) storyline took season five off to allow other characters to catch up. It returned this year and von Sydow guests as the Three-Eyed Raven who tries to teach Bran how to use his powers of sight. In “The Door,” he silently guides Bran to show him how the children created the night walkers. Bran, without his guidance, goes back in time where he encounters the Night King who touches his arm thus waking him up. The Three-Eyed Raven tells Bran that the spell which kept night walkers out of their cave is now broken. Even though he is not ready, Bran must take his place as the new Three-Eyed Raven.

As the battle between the night walkers, the children and Bran’s travelling companions Meera Reed (Ellie Kendrick) and Hodor (Kristian Nairn) commences they have one last shared vision of his father, Ned Stark. While in the vision, the Three-Eyed Raven tells Bran to leave him, as the Night King in the present kills him. Will von Sydow’s performance win him his first Emmy? Let’s consider the pros and cons:

PROS
This screen veteran, who made 11 films with Ingmar Bergman, has earned two Oscar nominations: Best Actor for “Pelle the Conqueror” (1987) and a surprise Best Supporting Actor bid for “Extremely Loud & Incredibly Close” (2011). And he has appeared in a wide range of popular films including “The Exorcist” (1973), “Minority Report” (2002), and last year’s blockbuster “Star Wars: The Force Awakens.” However, von Sydow has never received a major Hollywood award and is largely considered overdue.

TV’s reigning Best Drama Series champ “Game of Thrones” numbers six acting nominations among its 23 bids this year: von Sydow in guest and Peter Dinklage, Kit Harrington, Emilia Clarke, Lena Headey and Maisie Williams in supporting. That’s the most in the series’ history, so if the show sweeps with the acting branch then von Sydow could easily go along for the ride.

“The Door” is not only Sydow’s submission, but it has also been singled out for Best Directing. His episode is the only one among the Drama Guest Actor nominees that’s been recognized for either writing or directing, suggesting it’s more acclaimed overall.

CONS
Because “Game of Thrones” interweaves several different storylines and characters, von Sydow makes his first appearance only at the 19-minute mark. If voters aren’t familiar with “Game of Thrones” they may give up before seeing his best work, which comes at the end of the episode.

While von Sydow casts a regal and authoritative figure as the Three-Eyed Raven, his performance is largely silent. In those few opportunities he is given to speak, the performance is subtle and restrained mostly in the eyes. It might not be big enough for voters.

Von Sydow’s section is heartbreaking but it largely focuses on Hempstead-Wright’s character. While his death is sad it might be upstaged by the larger action sequence within which it takes place.