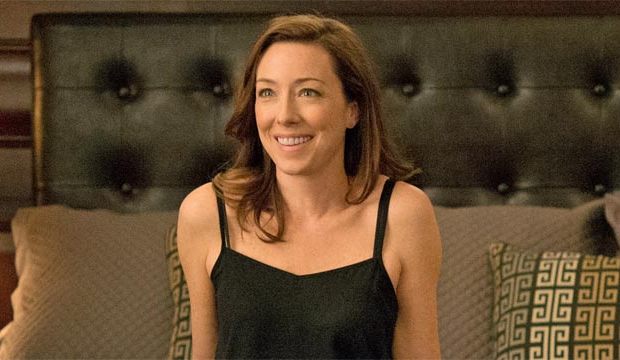 Molly Parker has earned her first-ever Emmy nomination in the Drama Guest Actress category for the fourth season of “House of Cards.” On the Netflix political drama she portrays Rep. Jackie Sharp, a congresswoman from California who also serves as the Democratic whip in Congress, a job which used to be held by President Frank Underwood (Kevin Spacey). Parker has submitted “Chapter 45” to the Emmy voters, the sixth episode of the season.

SYNOPSIS
We see Jackie in a car with Remy Danton (guest actor nominee Mahershala Ali). Jackie asks that her and Remy get away from Washington to enjoy themselves but Remy asks her instead why she is working to kill the deal being negotiated between the U.S., China and Russia on oil prices. Jackie insists that she is adamant about not having anything to do with the Underwoods or helping them succeed. Remy warns her that Claire Underwood (Robin Wright) has evidence of their affair and would be willing to destroy Jackie’s career if she continues to interfere with the deal. Frustrated with the way the conversation has gone, Jackie demands to be taken home by Remy.

Later, Claire visits Jackie’s office on Capitol Hill to persuade her in person about supporting the deal only to find her meeting with the House Democratic leader to schedule a vote on the deal. This pleasantly surprises Claire and Jackie speaks with her in private. Jackie asks if Claire will always treat her like this when she’s opposed to what the administration wants to do. Claire replies by saying that as long as they are on the same side, then there’s nothing to worry about. Towards the end of the episode, the international deal is being announced on the news. As the news is being reported Jackie sends Remy a congratulatory text message. Remy calls her but she ignores the call and goes back to work.

Can Parker take home Emmy gold on her first try? Let’s consider the pros and cons:

PROS
Parker is a longtime character actress with notable roles on past Emmy favorites “Deadwood” and “Dexter” and the Emmys do love to reward women like that in this category. Past examples include Patricia Clarkson (“Six Feet Under,” 2002 and 2006), Loretta Devine (“Grey’s Anatomy,” 2011), Martha Plimpton (“The Good Wife,” 2012) and Carrie Preston (“The Good Wife,” 2013).

The character of Jackie Sharp has been a fan favorite since she debuted at the beginning of season two. If the voting panel consists of good number of “House of Cards” fans, that can only help Parker.

“House of Cards” has proven that it can win in acting races with Reg E. Cathey‘s win for Best Drama Guest Actor last year. This definitely helps people be able to see her as a potential winner.

CONS
Jackie doesn’t really do much in this episode and doesn’t feel very integral to how the episode plays out. What hurts her even more is that she doesn’t have a moment during her brief screen time where she gets a scene to wow viewers with.

She is also competing against Ellen Burstyn for her guest stint on this season of “House of Cards.” Burstyn is an Oscar winner (1974 Best Actress, “Alice Doesn’t Live Here Anymore”) who has also won two Emmys (2009 Drama Guest Actress, “Law & Order: SVU” and 2013 Movie/Mini Supporting Actress, “Political Animals”) and the showiness of her role could very easily overshadow Parker.

If voters aren’t actually watching the episode, they might not even know who Parker is because she’s not a household name. The expanded voting pool greatly diminishes her chances to come out on top.