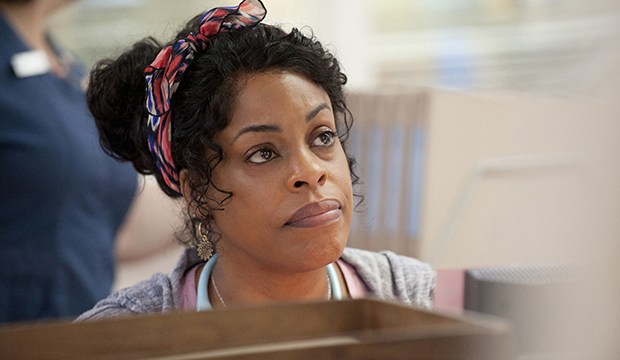 Last year Niecy Nash scored an Emmy bid for her role as Nurse Denise “Didi” Ortley on the HBO dark comedy “Getting On.” Now Nash is back with her second consecutive nomination, with this one coming for the show’s final season. While she is hoping for her first Primetime Emmy win, Nash does already have a Daytime Emmy trophy for Best Special Class Special for “Clean House” in 2010. Nash has selected the episode “Don’t Let it Get in You or On You” as her submission to the Emmy voters.

SYNOPSIS
Didi is talking on the phone with her sister-in-law, Yvette, about their mother-in-law, Mama Viv, and is assuring her that everything is fine. That does not stop Yvette from showing up at the hospital and asking why Mama Viv is no longer in her nursing home. Yvette then calls the whole family down to the hospital to get the situation sorted out. Didi explains that she had visited Mama Viv and saw that she was completely out of it and hadn’t been bathed in days. Since her husband had a concussion and Yvette was on a flight, Didi makes the decision to remove her from the nursing home and have her set up in her house until better arrangements could be made. When Didi brings up a live image of the nanny cam that they have to watch over Mama Viv, they see that she has fallen on the floor and eventually have her admitted to the hospital.

We also see Didi dealing with patients throughout the episode. We see her helping passengers from a cruise ship who are infected with a norovirus, trying to make a connection with a woman with an eating disorder and having her daughter, who has suffered from bulimia, visit with said patient. Didi and the entire staff also get served with termination papers, leading everyone to realize their section is closing down, and Didi finds out that Dawn (Alex Borstein) is going through dialysis. As the credits role, Didi asks if there’s anything she can do to help. Dawn asks that she sing the “Pony” song and after a brief moment of hesitation, Didi starts singing “Pony” by Ginuwine as if it were a spiritual hymn. Will Nash win for this show’s final season? Let’s examine the pros and cons:

PROS
There is real affection for Nash in this role. Last year Nash made this category as one of eight nominees and she managed to return as one of just six this year edging out several heavy-hitters including two-time champ Julie Bowen (“Modern Family”) and Mayim Bialik (“The Big Bang Theory”).

In its final season, this little show also garnered a nomination for Laurie Metcalf for Comedy Lead Actress, proving that it’s expanded its support among the actors branch.

Nash has an extensive resume specifically in television and the fact that she’s worked with so many actors over the years could definitely help put her in the winner’s circle.

CONS
As great as Nash is in her episode, there’s not much buzz overall for the show and it aired its series finale way back in December.

Even with everything that Didi gets to do in this episode, not much of it is actually funny. Rather, she happens to be adjacent to situations that provide this episode with its dark humor.

The show is already over and doesn’t have any excitement building for it.