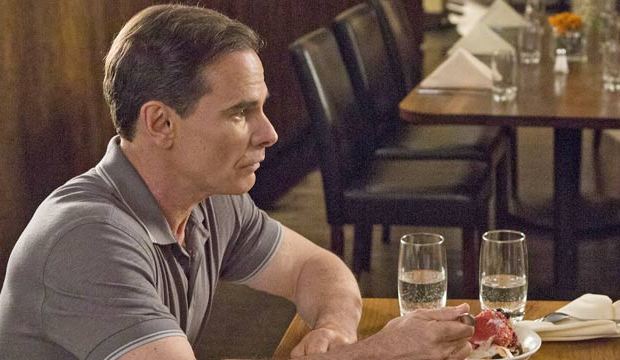 Peter Scolari’s career in television hit its first peak in the 1980s when we was nominated for three Emmy Awards for Best Comedy Supporting Actor in “Newhart.” After failing to win, Scolari’s awards presence all but vanished until his next career peak began with the pilot episode of “Girls,” almost 30 years after he first appeared in “Newhart.” This year Scolari is up for the Comedy Guest Actor award for his role as Tad Horvath, father to Lena Dunham’s Hannah in HBO’s once Emmy perennial nominee “Girls.” He has submitted Season 5’s second episode, “Good Man,” for consideration.

SYNOPSIS
As the episode title might suggest, the thematic thread to “Good Man” is three male characters’ attempts to present themselves as good men. One of those men is Tad who calls his daughter at work in tears over an unknown predicament. Upon reaching her father, Hannah learns that her father came to New York to meet a male suitor he met online and is an emotional wreck over leaving his wallet at his hookup’s apartment. Newly out of closet and ashamed of both his carelessness and his promiscuity, Tad is inconsolable throughout the episode.

After successfully retrieving the lost wallet, Hannah takes Tad to a restaurant where he begins to reclaim the role of adult that she had otherwise taken up in the first half of the episode, but his attempt to give her fatherly advice quickly turns back on him when she reveals that her mother wants a divorce from him. Juxtaposed with the comical tears of the emotional breakdown earlier in his hotel room, Tad’s similar reaction to news of the divorce reminds us what we love so much about “Girls” — that life is a journey made up of both the brief, sometimes embarrassing interactions we have with strangers and the decades-long relationships of our family and friends, and that any one of them can feel as important as another. Will Scolari’s return to the Emmys result in the first acting win for “Girls”? Let’s examine the pros and cons:

PROS
Scolari’s last Emmy nomination was in 1989, despite his being a presence on television for the next two decades and beyond. This is the TV academy’s chance to reward a hardworking character actor for recognition of their entire body of work.

In “Good Man,” Scolari shows the spectrum of why his character is so compelling to watch as he’s both endearing and heartbreaking. Scolari’s fatherly chemistry with Dunham is at its most palatable in this episode. The absurdity of watching a grown man react so emotionally over the frustrations of online dating — something most of the “Girls” target audience would otherwise find banal by now — is a pure joy to watch in Scolari’s employ.

CONS
The biggest hurdle for Scolari is that, as the replacement nominee after Peter MacNicol’s (“Veep”) disqualification, he’s known to be the seventh-place finisher in the nomination process, information that is typically unknown to voters. Many could see his nomination as the achievement and won’t feel compelled to propel him ahead of the five men that were nominated in front of him.

Three years ago “Girls” scored five nominations and then two nominations in each of the last two years, but this year Scolari is the show’s only bid, signifying a steady decline in favor among Emmy voters.