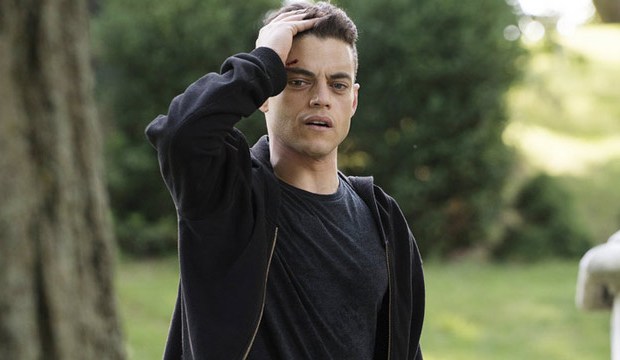 Rami Malek, one of television’s recent breakout stars, has earned his first Emmy nomination for Best Drama Actor for his riveting performance as Elliot Alderson on USA Network’s freshman series“Mr. Robot.” Malek already has won the Critics’ Choice Television Award and been nominated for the Screen Actors Guild and Golden Globe Awards for this role. He has submitted the series premiere “eps1.0_hellofriend.mov” for consideration by Emmy Awards voters.

SYNOPSIS
This episode introduces viewers to Elliot, a self-proclaimed “vigilante hacker” who works as a cyber security engineer for Allsafe. After a morning session with his therapist, Elliot heads into work to thwart cyber attacks on Allsafe’s biggest client, the global, multi-billion dollar company E Corp. To resolve a particularly bad hack of E Corp’s network, Elliot and his boss travel overnight to E Corp’s server farm. Elliot spots the hacker’s tag, “fsociety,” and a note requesting him not to delete it, which he obliges.

On his subway ride home, a homeless man wearing a Mr. Robot jacket (Christian Slater) approaches Elliot, alluding to the fsociety tag. Elliot follows him to an abandoned arcade on Coney Island, where he meets a group of hackers working to bring down E Corp and free the world of billions of dollars of debt. With Elliot’s inside connection to E Corp through Allsafe, he helps fsociety frame E Corp’s Chief Technology Officer for the hack.

PROS
Malek was smart to submit the series premiere of “Mr. Robot.” For Emmy voters who may not have seen the series yet, this episode serves as a great introduction to Malek’s character. Due to the highly serialized nature of the show, any other episode from the season may have been too confusing for voters watching the series for the first time to follow and appreciate.

The actor has numerous standout scenes in the episode, including the opening one in which Elliot hacks and turns in a man for his illegal online activities, Elliot’s rant against the materialism of contemporary society at his therapist’s office, a short and vulnerable crying scene in his apartment, and his triumphant celebration in Times Square. Even when Malek is off-screen, which happens very infrequently, he is narrating the episode.

The second season of “Mr. Robot” has been airing during Emmy voting, ensuring that the series and Malek’s star-making performance remain top-of-mind to voters. “Mr. Robot” is seen as a culturally relevant “cool” series, which could benefit Malek.

CONS
While Malek has multiple standout scenes in both the beginning and the end of the episode, there are long stretches in the middle that are quite expositional and extremely technical. Even though the scenes are engaging and suspenseful, his performance takes a backseat to plot development. Emmy voters may also find all of the technical jargon confusing, which may hinder their appreciation of Malek’s performance.

The new system of voting at the Emmys may favor well-known actors and industry veterans, including rival competitors Kevin Spacey (“House of Cards”) and Bob Odenkirk (“Better Call Saul”). While Malek has gained a legion of new fans thanks to “Mr. Robot,” he may not have enough name recognition yet.