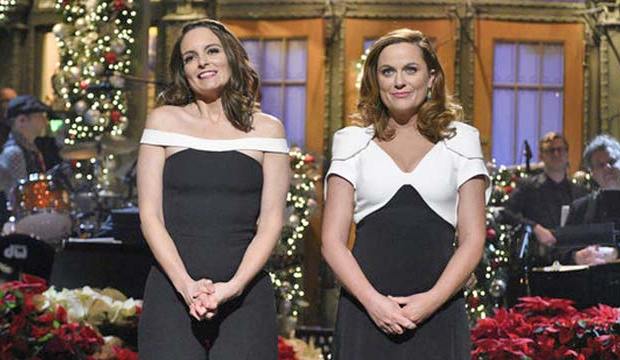 Tina Fey and Amy Poehler are nominated together at the Emmy Awards as Best Comedy Guest Actress for co-hosting the “Saturday Night Live” Christmas episode. It’s the first time in Emmy history that a duo is nominated for a single acting slot, so if they win they’ll enter the record books. Can they pull it off?

SYNOPSIS
Poehler and Fey appear in almost every sketch. In the monologue, they poke fun at their different styles as they sing an original Christmas song, “Merry Christmas Baby,” with Poehler being upbeat and positive and Fey being serious and dark. Among the other highlights:

-In a “Christmas Carol” spoof Hillary Clinton (Kate McKinnon) goes to bed in her pantsuit to be awoken by Hillary Clinton of the past (Poehler). While she’s being brought up to speed on the current election, Sarah Palin (Fey) joins them getting her facts wrong. It ends with a dance party.

-“Meet Your Second Wife:” Fey and Poehler host a game show in which contestants meet their pre-pubescent future wives and learn what happened in their first marriages.

–Kenan Thompson directs Poehler and Fey in a recreation of the movie “Carol” crossed with “The Jeffersons.”

-At the end of “Weekend Update” Fey and Poehler take their spots back at the desk to tell the last zingers of the year.

-In a “Time-Life” commercial for a variety show from the 1960s, Maya Rudolph rejoins her one-time castmates as they play versions of singers from the 60s.

-“Bronx Beat with Betty and Jodi”: Poehler and Rudolph return to host a local talk show with Fey appearing as cousin Karen. The three joke about Isis, “Star Wars” and “Downton Abbey.”

Will these best friends take home the Emmy Award? Let’s examine the pros and cons:

PROS
Both are well-liked within the television industry, especially or their work on “SNL.” Poehler was nominated in the Comedy Supporting Actress category from 2008-2010. Fey won Comedy Guest Actress in 2009 and was nominated in 2010, 2011 and 2014.

Poehler is always the bridesmaid, but never the bride. She’s been nominated 17 times at the Emmys but has never won. Will her multi-Emmy-winning bestie Fey help her FINALLY get a trophy?

A political year allowed Fey to win this category with her impression of Palin. Poehler was nominated for her dead-on interpretation of Clinton. Could revisiting these ladies help keep them at the top of the voters’ minds?

CONS
Two in one spot? Huh? They’re the only duo on the list and this could put off voters who think it might set a bad precedent or don’t understand that they were co-hosts.

After taking a year off from this category, “SNL” nabbed three spots in the Comedy Guest Actress race. Joining Poehler/Fey are Schumer and Melissa McCarthy. All are equally funny and popular, and they could easily split the vote.

If Fey and Poehler are so popular why haven’t they already won together? Between 2013-2015 they were nominated each year for Writing for a Variety Special and Special Class Program for their wildly popular and well-received hosting of the Golden Globes.