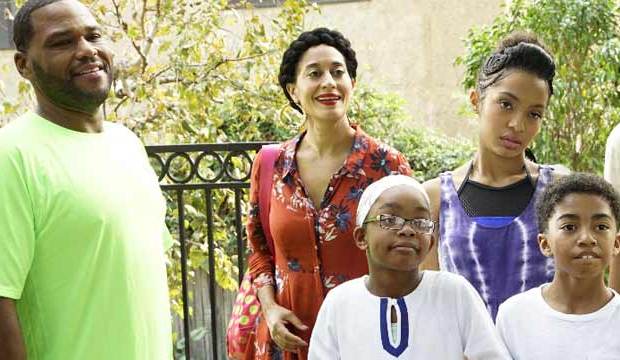 Tracee Ellis Ross has earned her first career Emmy nomination in the Best Comedy Actress category for her performance as Rainbow “Bow” Johnson on ABC’s hit comedy “Black-ish,” which is also nominated for Best Comedy Actor for her co-star Anthony Anderson, as well as Best Comedy Series. She has submitted the episode “Sink or Swim” to Emmy voters.

SYNOPSIS
Bow (Ross) doubts her husband Andre’s (Anderson) suspicion that the neighbors haven’t invited them to the neighborhood pool party due to racial prejudice. But even when Dre does manage to get them an invitation Bow doesn’t want to attend; she’s trying to avoid the local “School Mom Mafia,” who are badgering her to be more involved in school activities.

Later, after watching her children try to obtain material goods without earning them, Bow has a drunken run-in with one of the “Mafia” moms, whom Bow accuses of being superficial and unsatisfied with her life. But Bow is embarrassed when she learns that the mother is a neurosurgeon, and even more so when she then sees Dre drowning in the pool.

Does Ross have the material to earn her first Emmy statue? Let’s consider the pros and cons her submission:

PROS
Emmy voters love range, and Ross gets many chances to show a great deal of it in this performance. She first is frustrated with her husband’s racial paranoia, then concerned about her children’s use of social media to get free gifts. She even gets to be drunk during her confrontation at the pool party — awards voters love drunk performances.

Ross, who already has five NAACP Image Awards for Comedy Acting — two for “Girlfriends” (2007, 2009), one for “Reed Between the Lines” (2012), and two for this role (2015-2016) — earned a Critics’ Choice nomination earlier this year. With the show now earning additional nominations at the Emmys, voters are clearly warming to the show as a whole, which can only benefit Ross.

Ross’s submission, with its discussion of parenting in the shadow of the increasing presence of social media, is extremely timely in the age of Snapchat, Instagram, and Twitter.

CONS
Ross’s storyline is secondary to the episode’s main plot. Additionally, Anderson has more laugh-out-loud moments, which could possibly take voters’ attention away from Ross.

One of the key ingredients of a winning tape is sympathy, but Ross’s character comes across as unlikable and judgmental through much of the episode, particularly when she mocks the other mothers and labels them as trophy wives.

Though “Black-ish” received more nominations this year than last, it failed to receive nominations for writing and directing, which could signal an overall lack of support in the academy.