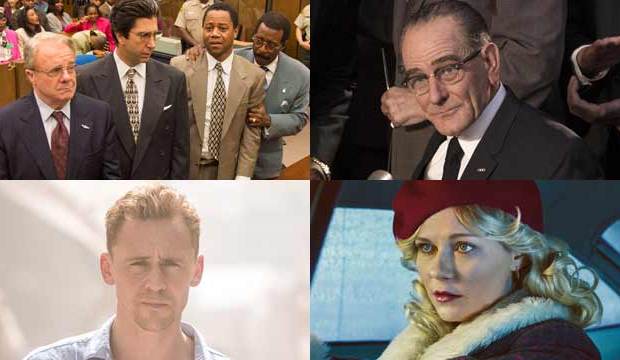 Courtesy of FX, HBO and AMC

Three directors earned Emmy nominations for “The People v. O.J. Simpson.” That indicates great support for the miniseries from the TV academy’s directors branch, but does it help or hurt the nominees when it comes to picking a winner? If support is split between the three, the directors of “Fargo,” “All the Way” and “The Night Manager” could capitalize.

Based on the combined predictions of expert TV journalists we’ve polled, “People v. O.J.” mastermind Ryan Murphy will prevail for the helming the first episode of the miniseries, “From the Ashes of Tragedy.” Four experts are betting on him, giving him leading 13/8 odds: Matthew Jacobs (Huffington Post), Matt Roush (TV Guide Magazine), Paul Sheehan (Gold Derby) and Jarett Wieselman (Buzzfeed). Murphy has a long Emmy history with 19 nominations and two wins: Best Comedy Directing for the pilot of “Glee” (2010) and Best TV Movie as a producer of “The Normal Heart” (2014). He also earned directing nominations for “Nip/Tuck” (2004), “Normal Heart” (2014) and “American Horror Story: Freak Show” (2015).

Also nominated for “People v. O.J.” is John Singleton for the episode “The Race Card.” Experts Eric Deggans (NPR) and Kerr Lordygan (Rotten Tomatoes) favor him to win, giving him 5/1 odds. Singleton rose to fame at an early age: in 1991 he earned an Oscar nomination for Best Director for “Boyz n the Hood” at the age of 24, which made him that category’s youngest nominee in history (the record still stands). But this is his first Emmy nomination.

The third nominee for “People v. OJ.” is Anthony Hemingway for the episode “Manna from Heaven.” He has extensive experience as a TV director, with past credits including “Shameless,” “Orange is the New Black,” “The Newsroom,” “Treme” and “Glee,” but this is his first Emmy bid. The nomination may be his reward, however, as our experts rank him fifth with 28/1 odds.

So who could challenge the “O.J.” trio? According to our experts, it might be Jay Roach for “All the Way,” the only telefilm nominated in a category full of miniseries and anthologies. Six experts are forecasting his victory: Debra Birnbaum (Variety), Joyce Eng (TV Guide), Tom O’Neil (Gold Derby), Anne Thompson (Indiewire), Ken Tucker (Yahoo) and Adnan Virk (ESPN). However, when you add in the rest of the experts’ rankings he’s actually in second place behind Murphy with 9/5 odds. But maybe the rest of our experts are underestimating him: Roach is a four-time Emmy winner: Best TV Movie and Best Movie/Mini Directing for “Recount” (2008), Best Movie/Miniseries and Best Movie/Mini Directing for “Game Change” (2012). In fact, Roach has never lost when nominated.

“Fargo” showrunner Noah Hawley is also a formidable contender for directing the episode “Before the Law.” Hawley won Best Miniseries in 2014 as a producer of “Fargo,” but this is his first nomination as a director. However, “Fargo” did win the directing prize in 2014 as well, for Colin Bucksey, so we know the directors branch is already fond of the anthology series. Nevertheless, Robert Rorke (New York Post) is the only expert predicting him, resulting in third-place odds of 7/2.

The last nominee in the category also has an impressive pedigree: Susanne Bier contends for the six-part miniseries “The Night Manager” which she directed in its entirety. This is her first Emmy nomination, but she previously directed the film “In a Better World,” which won the Oscar for Best Foreign Language Film in 2010, representing Denmark. But a victory here is unlikely according to our experts, who give her 33/1 odds.