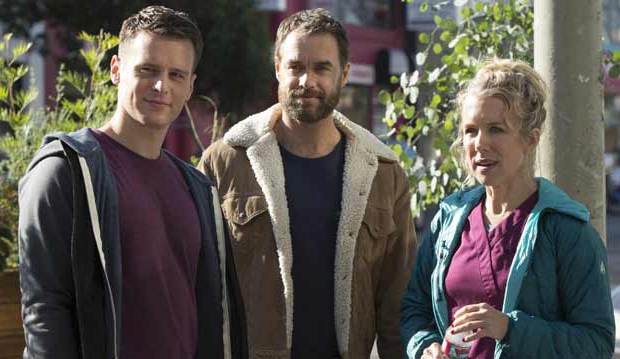 One of TV’s saddest days in recent years was the day in spring 2015 when HBO cancelled “Looking,” its slice-of-life dramedy about gay friends living in San Francisco, after two seasons. But there was a silver lining: the series would get a feature film to wrap up its storlines. And as an avid awards watcher I knew that this meant not only a chance for closure for these characters, but another chance at Emmys — and in a brand new category.

“Looking” wasn’t nominated for any Emmys during its two full seasons when it competed as a comedy series, but now it’ll have a chance to enter the race for Best TV Movie. Switching to the longform categories has been an Emmy boon for several other discontinued shows in recent years.

For instance, “The Big C” on Showtime didn’t win any awards until it bid farewell with its “Hereafter” miniseries, for which Laura Linney won Best Movie/Mini Actress in 2013. Over on HBO, the drama series “Treme” was an Emmy also ran until its shortened fourth season earned nominations for Best Miniseries and Best Movie/Mini Writing in 2014. Then in 2015 “Hello Ladies: The Movie” earned Emmy noms for Best TV Movie and Best Movie/Mini Writing after the series was unable to make a dent in comedy races for two seasons.

“Looking” could have a similar Emmy resurrection. Its finale film premiered on July 23 – but therein lies its problem. Voting for the next Emmys doesn’t start for another 11 months, so the show, which was under the radar to begin with, is at risk of getting lost in the shuffle. Will voters still remember it next June?

That’s why I’m writing this now. Emmy voters, you have 11 months to watch this movie. Or if you’d like to watch the rest of the series first, there were 18 half-hour episodes produced that you could knock out in a weekend – I saw how many Emmy nominations you gave “Game of Thrones” and “Veep” this year, so I know you’ve got HBO Go.

Emmy Award for Best TV Movie: ‘All the Way’ will win, say all of our experts

The demise of “Looking” wasn’t caused by any kind of sophomore slump. Quite the contrary, “Looking” was a rare example of a show that started good but then became suddenly, unforeseeably great in its second year. It found its groove, to the point where the actors, writers and directors seemed to understand their characters at an instinctual level.

Is the movie just as good as the show was when season two ended? Well, it only has 86 minutes to tie up loose ends, but it does that about as well as you could hope for. Almost a year after the breakup between video game designer Patrick (Jonathan Groff) and his coworker-turned-beau Kevin (Russell Tovey), Patrick has moved back home to Denver, Colorado, but he’s back in San Francisco for the wedding of his best friend Agustin (Frankie J. Alvarez). He also spends time with another longtime friend, Dom (Murray Bartlett), and resolves the show’s central love triangle: should he choose Kevin, or working-class barber Richie (Raul Castillo)?

Emmy verdict is in: ‘The People v. O.J. Simpson’ will win Best Limited Series according to all experts

I usually bristle at finales that work too hard to resolve all storylines. Hastily assembled happy endings often feel like fan service instead of natural storytelling – if given the choice I’d take loose ends over gift-wrapped resolutions. But while “Looking: The Movie” does build towards a fairly neat and tidy ending I was surprised by how well it earns that ending. That’s because of how well this show knows its characters.

Less an ensemble piece than the rest of the series was, the film is organized around Patrick’s point of view. That was a smart creative choice because the film doesn’t have the luxury of time and benefits from having a strong focal point. It helps that series creator Michael Lannan and co-writer and director Andrew Haigh are so efficient with their time that they are able to develop characters in less time than it takes most writers to put pen to paper.

Consider the reunion between Patrick and Kevin, which is so full of meaning and fraught with emotional complexity that you could get a full sense of their relationship from it without ever having seen the show previously. The same is true of a scene between Patrick and Dom, both single, who wonder half-seriously if perhaps they were meant to be a couple. For that matter, Tyne Daly appears in just one scene as an unnamed justice of the peace, but even that character feels completely lived-in. The dialogue in this movie is so good I want to go swimming in it.

“Looking: The Movie” scored 71 on MetaCritic, with Daniel D’Addario (Time) writing, “For the uninitiated, it’s a moodily made argument to check out a series that deserves a long afterlife.” Adds Sonia Saraiya (Variety), “It’s not always possible to get a satisfying ending out of television. But this one is also graceful, a closing pirouette that drops the curtain on these characters so that we can let them go, however unwillingly.” Jon Frosch (Hollywood Reporter) feels “there’s enough greatness in it to make fans (we’re out there!) agonize anew over the fact that, yes, this time it’s over for real.”

So you’ve got homework, Emmy voters, and I’m giving you 11 months to complete it, so “The dog ate my cable box” isn’t going to cut it next July if the nominations are announced and “Looking” is still looking for recognition.