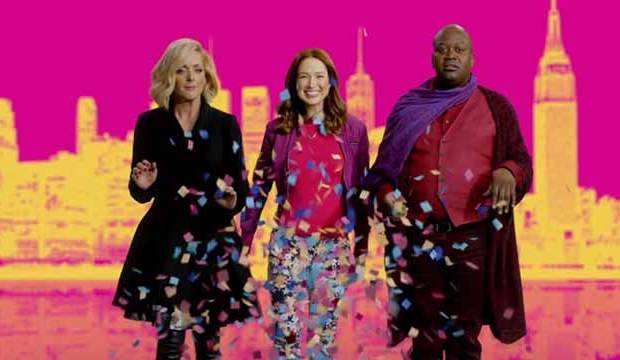 Binge-watching the second season of “Unbreakable Kimmy Schmidt” on Netflix was a top priority for fans starting this past weekend. With the debut of 13 new episodes, I couldn’t wait to be among that group. I’m at the halfway mark, so here are my thoughts so far on the comedy series and its potential Emmy chances this time around.

The first season last spring focused on the aftermath of Kimmy Schmidt (Ellie Kemper) leaving a cult and her new life in New York City. For this even better sophomore effort, the trial of cult leader Reverend Richard Wayne Gary Wayne (Jon Hamm) is now behind her, so Kimmy spends much of her time trying to straighten out other peoples’ lives. Her roommate Titus (Tituss Burgess) has a new construction worker boyfriend who’s just coming out of the closet, and Titus doesn’t know if he has the energy to train a cub. Landlady Lillian (Carol Kane) is concerned with gentrification of her neighborhood, while Kimmy’s boss Jacqueline (Jane Krakowski) desperately tries to keep up appearances when she suddenly becomes husband-less. It’s exhausting — what’s a girl to do?

When it first premiered I liked the series, but it felt a little like network television to me. That was surprising for Netflix but understandable since creators Tina Fey and Robert Carlock developed it for NBC. What I noticed about the first half of this new season is how much freer and looser the series seems to be, particularly in its willingness to go places where network television might fear to tread.

Like last season, the lion’s share of the snarky lines are given to Krakowski’s spoiled Jacqueline, whether she’s boasting (“I went to a playdate once where the kids got to run the Greek economy”) or defensive (“I’m not a quitter, Kimmy!  I watched ‘Interstellar’ all the way to the end!”).  The writers’ love of in-jokes continues — in a sly reference to Hamm’s “Mad Men” finale, Kemper’s Kimmy argues, “The Reverend was a psycho-liar who claimed he came up with the ‘Buy the World a Coke” commercial!” — even extending to visual jokes (in a nod to the high court’s ruling on marriage equality, New York’s hottest gay bar is named SCOTUS).

“Kimmy’s” freshman-year success at the Emmys might have been helped by the presence of co-creator Fey. With “Saturday Night Live,” “30 Rock,” the Golden Globe Awards and now “Kimmy,” Fey has amassed an impressive 36 Emmy nominations with eight wins in a relatively short time, so expectations remain high for Season 2. For last year’s ceremony, the program received seven nominations (comedy series, supporting actor, supporting actress, guest actor, guest actress, casting, and stunts) but no actual trophies.

BEST COMEDY SERIES: Very Likely. Having made the cut in its freshman season and with two of its previous competitors not eligible (“Louie,” “Parks and Recreation”), things look good for a second straight nomination in the top category. Critical acclaim for the new season has 95% favorable on Rotten Tomatoes.  The series is comfortably in 3rd place in the Gold Derby predictions center.

BEST COMEDY ACTRESS: Very Likely. It was quite a surprise last year when Kemper was shut out of this category. With fully half of last year’s six-nominee lineup not returning (Edie Falco, Lisa Kudrow, Amy Poehler are gone), Kemper is very likely to snag her first ever nomination. This year’s SAG Awards nomination also shows she is firmly on the map. She is currently in 3rd place in the Gold Derby predictions center.

BEST COMEDY SUPPORTING ACTOR: Very Likely. Burgess was nominated last year and was a strong contender to win before Tony Hale (“Veep”) took the category. With even more outrageous material in the new season (at least halfway in for my viewing), Burgess will likely be a powerful force this year as well. He is comfortably in 2nd place in the Gold Derby predictions center.

BEST COMEDY WRITING: Possible. With Fey being such an Emmy magnet, it was quite a surprise last year that she did not get nominated in this category. Of the first few episodes I’ve seen this season, the series might submit the season premiere (“Kimmy Goes Roller Skating!”), written solo by Fey or either “Kimmy Goes To a Hotel!” or “Kimmy Finds Her Mom!,” both co-written by Fey and Sam Means.

GUEST CATEGORIES: From the first six episodes I’ve seen so far, the real standouts have been Anna Camp, Lauren Adams, and Amy Sedaris. More to come soon on the possibilities for these categories.