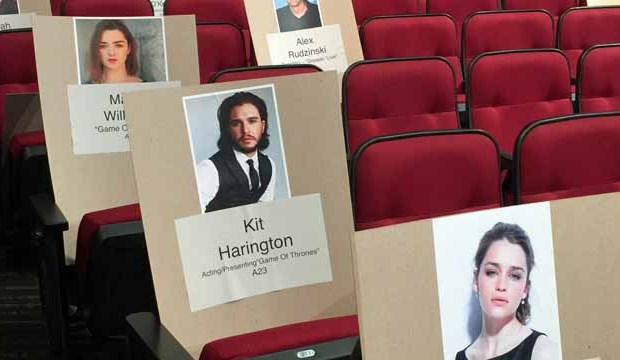 Based on our tour of the Microsoft Theater on Wednesday morning, Gold Derby can exclusively reveal the top secret show rundown for Sunday’s Emmy Awards ceremony. The show will be hosted by Jimmy Kimmel (“Jimmy Kimmel Live”) live on ABC beginning at 5:00 p.m. PT/8:00 p.m. ET.

After Wednesday’s red carpet roll-out event with producer Don Mischer, Kimmel and TV academy officials, we took a tour of the Microsoft Theater in Downtown Los Angeles. Photo cards were scattered throughout the audience indicating where the nominees and presenters will be seated (see photo gallery above). These are a regular tradition at awards shows. They help the directors and camera operators run through all of their potential moves before the actual live show.

Each card indicates the order of presentation (such as A23 on the card of Best Drama Supporting Actor nominee Kit Harington above). By piecing those card numbers together like a puzzle, here is the order for all 27 categories on Sunday. Keep in mind, however, that producers might change any portion of this schedule before the actual event, especially now that we’ve spilled their secret.

It does appear that almost all the acting nominees will be attending. However, we did not see seat cards for drama supporting actress nominees Lena Headey (“Game of Thrones”) and Maggie Smith (“Downton Abbey”), drama supporting actor nominee Ben Mendelsohn (“Bloodline”), and movie/mini contenders Audra McDonald (“Lady Day at Emerson’s Bar and Grill”), Benedict Cumberbatch (“Sherlock: The Abominable Bride”), and Idris Elba (“Luther”). It is very possible they will be missing the show.