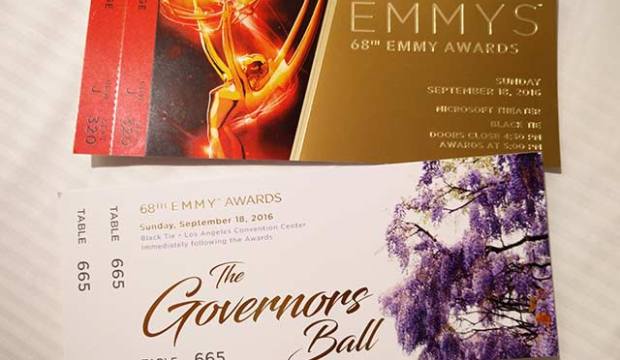 The 68th Emmy Awards were my first, even though they were hardly my first. I have been watching for almost two decades, dating back to the years in the late 1990s when I desperately waited for “Buffy the Vampire Slayer” to get its due. It never did, and that sparked my fascination with showbiz awards and how they operated. But on September 18, 2016, I attended my first-ever Emmys telecast in person, and it was a fascinating, through-the-looking-glass experience. Click through my first-person photo gallery above.

It wasn’t the pomp and circumstance. If the next Emmys were held on casual Friday in the parking lot of a Denny’s I’d be just as eager to attend. I think the stars would be too, so they could avoid black-tie obligations on a 90-degree late-summer day – gather ’round in your finest cargo shorts! The style and prestige are fun accouterments, but I care less about the magic of Hollywood than about the technique behind the magic. I like to see how the sausage is made.

So the winners were lovely – especially thrilled for the surprise victories by Tatiana Maslany (“Orphan Black”) and Regina King (“American Crime”) – but I was more fascinated by the in-between moments, like the child actors from “Stranger Things” warming up the crowd before the show started with a cover of Mark Ronson and Bruno Mars‘s “Uptown Funk” – someone cast Millie Bobby Brown in a musical immediately because she has killer pipes and stage presence.

Watch our live Emmys 2016 post-show: Our editors dish ‘Game of Thrones,’ ‘Veep’ and those shockeroos

The pre-show also revealed what Emmy winners see once they get on stage: an inverted triangle with a sinister red meter that counted down the 45 seconds they had to make their speeches, like sands through an hourglass. And the Emmy producers weren’t messing around; though a couple of champs like Jeffrey Tambor (“Transparent”) were able to successfully shush the play-off music, a number of others had their microphone audio cut.

Attendees spent commercial breaks on their cell phones; I was often one of them – the Microsoft Theater is a Poke-stop. But by the middle of the show the commercial breaks turned the theater into the world’s most extravagant sports bar, with the large TV monitors on either side of the stage showing the football game between the Green Bay Packers and the Minnesota Vikings. One wonders if the Packers similarly kept up with Emmy results between plays.

Audience members were instructed to take their seats after each segment with the flashing of lights, just like at Broadway shows (or your high school homeroom). And we were explicitly instructed to hold our applause until the end of the “In Memoriam” segment, but one or two Emmy-watchers around me still turned it into a popularity contest, applauding the deceased celebs they’d heard of at the expense of the others. But singer Tori Kelly‘s rendition of “Haalelujah” was so good that it made up for how generally overplayed that song is.

Emmys host Jimmy Kimmel did a bit in which his mother prepared peanut butter-and-jelly sandwiches for the audience, which seems to be a new trend after Ellen DeGeneres ordered pizza at the 2014 Oscars telecast and Chris Rock sold Girl Scout cookies at this year’s Oscar event. That’s understandable: unlike the Golden Globes, the Oscars and Emmys are long auditorium events and not dinner parties, so feeding your audience (who were discouraged from bringing outside food into the theater) is a good way to earn our good will.

Kimmel joked that audience members with peanut allergies were out of luck since ABC could only afford one Epipen, a nicely pointed dig at the drug company Mylan, which raised prices for the life-saving drug. I myself am allergic to peanuts, so it was fortunate that the goodie bags also came with an apple, a juice box and a lovely note: “Have fun tonight! Win or lose, your mom will always love you. Don’t get drunk. XOXOXO, Joan (Jimmy’s mom).”

After the Emmys wrapped up, audience members were corralled out of the Microsoft Theater into the Governors Ball at the neighboring Los Angeles Convention Center. I had no clear idea what to expect from the venue and was shocked by its sheer size and grandeur. Imagine a high school prom held in a football stadium decorated as a living embodiment of “A Midsummer Night’s Dream.” Musical guests performed in the middle of the space on a revolving, triple-decker stage that looked like a giant wedding cake. Performers included the outstanding Jordan Smith, the winner of season nine of “The Voice,” which had just won its third Emmy for Best Reality-Competition Series.

Emmys 2016: ‘Game of Thrones’ sets new record as most awarded primetime series ever

Then I was off to the HBO Emmy party where I had a chance to congratulate winners including Keegan-Michael Key (“Key and Peele”), Sterling K. Brown (“The People v. O.J. Simpson”), Rami Malek (“Mr. Robot”) and Steven Moffat (“Sherlock: The Abominable Bride”), as one is wont to do. There were Emmys all around – by far the most impressive of all major awards statues, and the sharpest. I didn’t get to take one with me, but I did leave with complementary HBO muffins. Which is better? I’ll let you know after breakfast in the morning.